After over a year away from combat sports, Chad Mendes returned to the fight game on Sunday.

The three-time UFC title challenger is currently serving a two-year suspension after failing an out-of-competition USADA drug test on May 17 2016. He tested positive for the banned substance GHRP-6, a growth-hormone peptide, which he claimed came from a skin cream he was using to treat plaque psoriasis.

He will not be allowed to enter the Octagon again until May 17 2018 at the earliest, and he has been removed from the official UFC rankings due to the suspension.

However, he has found another outlet for his competitive fighting spirit while he waits on the sidelines. 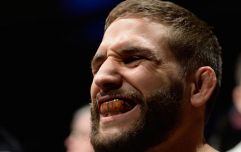 Chad Mendes really packed on mass ahead of UFC return

END_OF_DOCUMENT_TOKEN_TO_BE_REPLACED

The promotion adheres to the Eddie Bravo Invitational Rules, meaning that both fighters duke it out for 10 minutes to try and score the submission. Striking is not permitted.

Neither Mendes nor Glover could force the tap within the time limit, so the bout went to overtime rounds.

After the coin toss, Glover went on the offence first. Starting from the back position, he went to work on the rear-naked choke, forcing a quick tap after just 35 seconds.

Mendes had no time to mull over the finish as it was then his turn to go on the attack. He had to beat Glover's lightning quick finish time in order to win the bout, but pressure creates diamonds. When he was really up against it, Mendes produced a real gem of a finish to force the tap after just eight seconds.

Commentator Chael Sonnen was bamboozled by the huge upset of a UFC fighter with no official BJJ belt submit such a decorated grappler. His response to the result was "you just ruined grappling."

And in case you missed @chadmendes getting gnarly on a blackbelt at #SUG3 here you go! Amazing night @SUG_Grappling pic.twitter.com/RBydR3jJY4


popular
Matt Williams wants two changes and Peter O'Mahony benched for Ireland vs. France
"Remember that name" - Sonny Bill Williams raves about Ireland U20 star after outrageous try assist
"He rode him like a machine rather than a racehorse" - Mullins doesn't spare Townend as second string come good
Peter O'Mahony reaction to Liam Williams scuffle shows he may finally be mellowing
Ireland vs Wales: All the big talking points, moments and player ratings
Two changes as familiar faces return to our Ireland team to face France
The two reasons why Aidan O'Shea's performance against Armagh was his best in ages
You may also like
4 years ago
Chad Mendes targets huge fight for UFC return
4 years ago
The surprisingly great and excruciatingly dumb insults Conor McGregor has had to endure
4 years ago
What every one of Conor McGregor's UFC opponents' faces looked like directly before and after fighting him
6 years ago
UFC finally give Jon Jones the Chad Mendes treatment following failed drug test
6 years ago
Chad Mendes opens up on how he failed USADA drug test that resulted in two-year suspension
6 years ago
Conor McGregor gives succinct response to Chad Mendes' suspension for failed drug test
Next Page