Breaking news - Urijah Faber and Conor McGregor don't get along.

END_OF_DOCUMENT_TOKEN_TO_BE_REPLACED

To be fair, Faber gave The Notorious props for the grittiness he showed in surviving Mendes' early onslaught.

"First off, Conor McGregor was a tough dude, no doubt," Faber told Ariel Helwani on yesterday's The MMA Hour.

"He was eating elbows, taking punches, and this guy likes to fight. He waited for his opportunity and finished the fight when he had his opportunity." 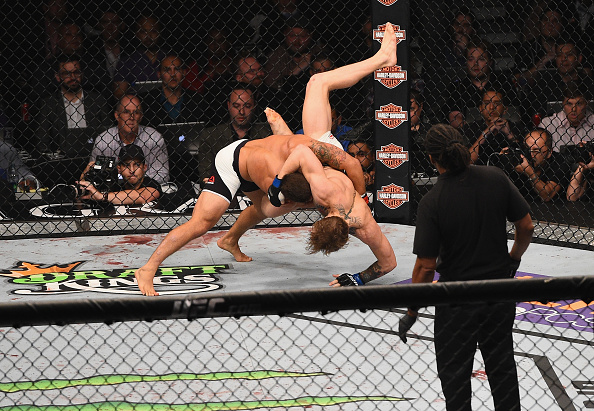 END_OF_DOCUMENT_TOKEN_TO_BE_REPLACED

But Faber, who will coach opposite the current UFC interim featherweight champion on season 22 of The Ultimate Fighter, was left underwhelmed by McGregor's wrestling skills as he was taken down four times by Mendes on Saturday night.

Yesterday it emerged that McGregor didn't do a single round of live wrestling in the run-up to UFC 189 due to a knee injury but the Dubliner was still able to scramble to his feet on a number of occasions against Mendes.

"If Chad Mendes were training for the biggest fight his life for eight weeks, for more than that, for 10-12 weeks, you're going to see a different Chad," Faber added. "A guy that would not fatigue, and then it becomes who is going to implement his game? Can Conor land punches? Can Chad land his takedowns? Chad landed big, solid punches as well."