Matchmaking in the UFC is like building a very unstable house of cards.

Just one tiny issue can send the plans for several fighters into complete disarray.

The organisation made the decision to put a belt up for grabs in the hope that it would make the pay-per-view slightly more tantalising for fans after the light heavyweight title rematch between Cormier and top contender Anthony Johnson fell apart.

It will be the first time in Holloway's career that he will fight for a belt, while former UFC lightweight champ Pettis is more accustomed to title fights.

END_OF_DOCUMENT_TOKEN_TO_BE_REPLACED

But we almost didn't have this barn-burner of a featherweight fight to look forward to as UFC matchmaker Sean Shelby has revealed that he originally had a different plan in mind for Holloway.

"Fun fact - on the October 1st main event, the Portland main event, it was supposed to be Max Holloway vs. Doo Ho Choi before we got to this," Shelby said on the UFC 206 Watch List. 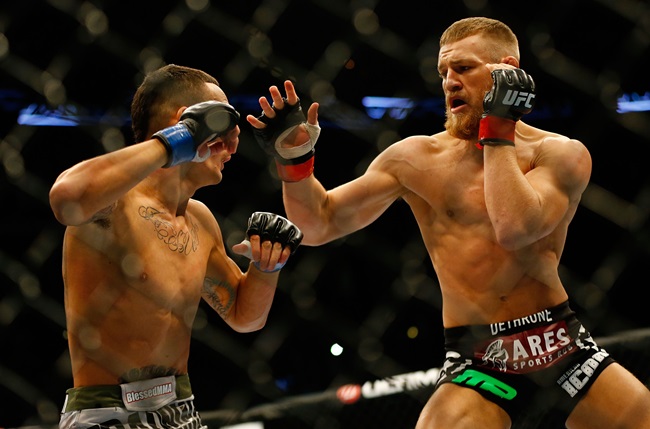 "For whatever reason, Choi's visa wouldn't be ready in time so we had to can that and we move on to this even more amazing fight."

END_OF_DOCUMENT_TOKEN_TO_BE_REPLACED

With McGregor completely removed from the UFC's featherweight rankings, it's looking likely that his scheduled hiatus will end with a defence of his lightweight title while Jose Aldo, who was promoted to undisputed featherweight champion following the recent title shake-up, will take on the winner of Holloway vs. Pettis in a unification bout at some stage in 2017.

Choi, meanwhile, after missing out on the chance to take on Holloway, will take on the fourth-ranked featherweight Cub Swanson at UFC 206 on Saturday night.