Something tells us there's going to be a lot of votes for "Other" on the UFC's greatest fighter ever poll.

When the discussion over who's the greatest UFC fighter ever crops up, generally three names dominate - Georges St-Pierre, Jon Jones and Anderson Silva.

These three fighters have all held belts for a long time, have destroyed elite-level challengers and are widely considered to be some of the most complete fighters in MMA history.

END_OF_DOCUMENT_TOKEN_TO_BE_REPLACED

However, there is one man who has thrust himself into the GOAT debate with his performances inside the Octagon over the past number of years. If you haven't already guessed who we're talking about, see if you can notice  the large (or small, hint, hint) presence that has been excluded from the poll. 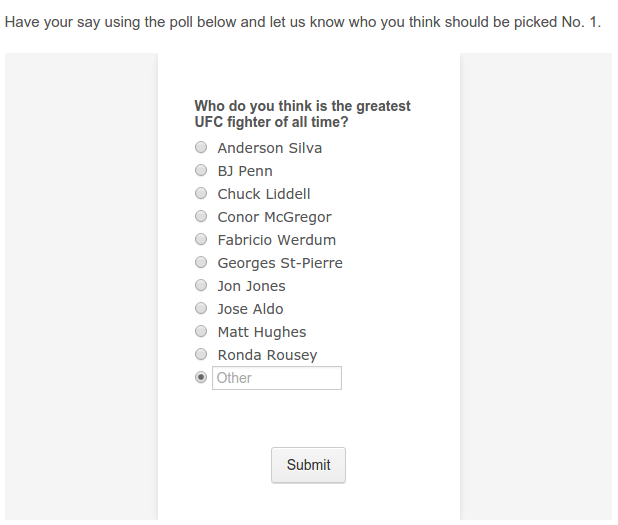 That's right, where the hell is Demetrious Johnson? The number two-ranked P4P fighter in the UFC has yet to taste defeat at 125 lbs and hasn't looked in any danger of losing that record since recording a draw against Ian McCall in his flyweight debut.

Since then he has defeated the cream of the flyweight crop with everyone including McCall in the rematch, Joseph Benavidez (twice), John Dodson (twice), Kyoji Horiguchi and most recently Henry Cejudo.

The UFC are running the poll as promotion for the landmark UFC 200 card and they have given the following criteria for their chosen nominees.

"As you make your decision, please note that any fighter who has competed inside the Octagon from UFC 1 up until UFC 200 is eligible for consideration, and fighters are being judged on their entire body of work in mixed martial arts. Contributing factors in the decision will include: championship reigns, win-loss record, caliber of opponent, era in which they competed, athletic innovation and historic relevance."

Either someone messed up massively or they deliberately left DJ out to get schmucks like us to give the poll free advertising. If the latter is the case... well, played.


popular
"He rode him like a machine rather than a racehorse" - Mullins doesn't spare Townend as second string come good
"Remember that name" - Sonny Bill Williams raves about Ireland U20 star after outrageous try assist
Matt Williams wants two changes and Peter O'Mahony benched for Ireland vs. France
Peter O'Mahony reaction to Liam Williams scuffle shows he may finally be mellowing
Two changes as familiar faces return to our Ireland team to face France
Ireland vs Wales: All the big talking points, moments and player ratings
"The truth is I've never actually worked a day in my life" - Russell bows out on his own terms
You may also like
1 month ago
T.J. Dillashaw: Conor McGregor is right to pull out of USADA testing pool
1 month ago
Ariel Helwani shares Paddy Pimblett WhatsApp messages as spat becomes public
1 month ago
Conor McGregor savagely hits back at Joe Rogan following PED comments
3 months ago
"There’s a new Irish superstar in town" - Young Derry fighter touted for UFC after big title win
3 months ago
Conor McGregor almost unrecognisable after shaving off iconic beard
3 months ago
Dana White confirms Conor McGregor is not in the USADA testing pool
Next Page