One UFC superstar just made an incredible return to the Octagon, so it makes sense that the promotion is pushing for another to do likewise before the year's end.

The numbers don't lie. 2017 has been a down year for MMA, which is crazy considering it's the year that Jon Jones regained the title he never lost and we are likely to see Georges St-Pierre return before the year's end.

When Georges St-Pierre asks for a fight, it's difficult to deny him the opportunity. He's earned the right to choose his opponent for his UFC return after his storied career, but his timing for picking a middleweight title shot against Michael Bisping was pretty poor.

In less than a week, UFC president Dana White has dramatically changed his tune on the match-up between Bisping and GSP. During Thursday's pre-fight press conference, he promised that the winner of Tyron Woodley vs Demian Maia would get to welcome the Canadian back to the cage.

"The Bisping ship has sailed. It's gone. If you (Woodley) win on Saturday, it's going to gonna be you (fighting GSP), pal."

Then at the post-fight press conference on Sunday, White confirmed that the winner of UFC 214's co-main event would definitely not be rewarded with a money fight against St-Pierre.

"That ship turned around and fucking sailed back. (I decided at) fucking round five (of Woodley vs Maia). I know that Michael Bisping will show up and fight. There's no doubt about it."

White's stance felt like a punishment for Woodley, who successfully defended his belt in an admittedly lacklustre fight against the Brazilian jiu-jitsu black belt. However, when you have a gawk at the rankings, you realise there isn't really anyone else for Bisping to defend his belt against. 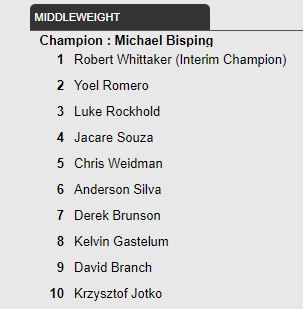 END_OF_DOCUMENT_TOKEN_TO_BE_REPLACED

Robert Whittaker earned himself a title unification bout with his stunning decision victory over Yoel Romero at UFC 213, but injury means he is sidelined for an extended period. So he's out of the running.

Romero is coming off a loss and the UFC would run the risk of a bizarre situation where Whittaker may have to unify the belt against the man he beat for the interim strap if the Cuban gets the call and beats 'the Count'.

Not only was Luke Rockhold defeated by Bisping in his last trip to the Octagon, but he's already been locked in to fight David Branch in September. Jacare Souza also lost his last contest to Whittaker.

The only fighter in the top five who is free and coming off a win is Chris Weidman. The only problem is before beating Kelvin Gastelum, the 'All-American' had lost three on the bounce.

Gegard Mousasi would have been a shoe-in because of his five-fight win-streak, but unfortunately, he's been snapped up by Bellator.

Oddly enough, the former welterweight king coming out of retirement seems to be the logical number one middleweight contender.

What a time to be alive.