It looks like the UFC no longer has an interim light heavyweight champion.

Jon Jones was set to headline what was pegged as the UFC's biggest ever event at UFC 200, but everything fell apart three days before fight night when it emerged that Jones had failed a pre-fight drug test.

Jones tested positive for two oestrogen blockers - clomiphene and traces of letrozole, which are on USADA's banned substance list.

“Well, sweetheart, you should have been watching your drink.” #UFC200 #UFC https://t.co/yWGSRADsC4

END_OF_DOCUMENT_TOKEN_TO_BE_REPLACED

Bones was pulled from his fight against Daniel Cormier, who was given a replacement bout against Anderson Silva further down the card. Returning superstar Brock Lesnar provided the co-main event against Mark Hunt, but that didn't work out too well for the promotion either as the WWE star failed not one, but two pre-fight drug tests before UFC 200.

Jones is awaiting a hearing with the Nevada Athletic Commission to determine his punishment, but he is staring down the barrel of a possible two-year ban from the sport.

END_OF_DOCUMENT_TOKEN_TO_BE_REPLACED

In the meantime, there's a large Jon Jones-shaped void in the official UFC rankings. Jones was ranked as the number-one contender in the light heavyweight division and number three in the P4P rankings prior to the latest update.

Brock Lesnar was also removed from the heavyweight rankings. 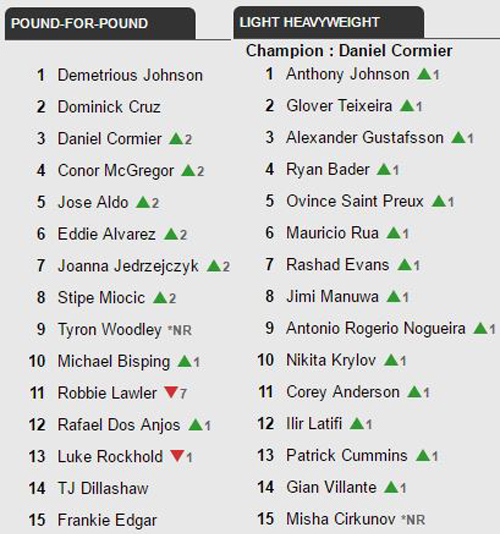 Another high-profile fighter to fail a drug test this year was two-time featherweight title challenger Chad Mendes. "Money" was popped for the banned substance GHRP-6, a human growth hormone, from an out-of-competition sample taken on June 18.

Mendes was suspended from competing until 2018 and just like Jones, he was removed entirely from the official rankings.