Tyson Fury may finally get the chance to back up all the criticism he's heaped on mixed martial arts in recent years.

The undefeated boxer has, for some time, been hugely vocal about his opinion that he could plough through any heavyweight who compete under MMA rules, being particularly critical of UFC heavyweight champ Cain Velasquez.

But it looks likeFury is set to swap the 12 oz gloves for the 6 oz version as Bellator president Scott Coker has announced that the promotion is in fight talk with the outspoken Englishman.

"We are in dialogue with Tyson about entering the Bellator cage," Coker said via MMAFighting. "Tyson seems to feel he can walk through any heavyweight MMA fighter. Let's see how serious he is." 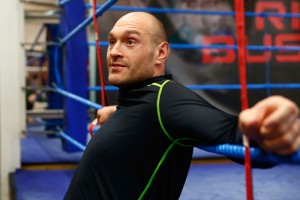 Fury has disparaged some of the biggest names among MMA heavyweights in the last ten years and believes that the fact that Brock Lesnar once held the UFC heavyweight belt does not cast the sport in the best light. 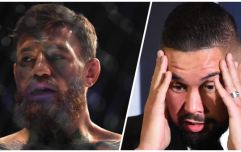 END_OF_DOCUMENT_TOKEN_TO_BE_REPLACED

"We all know WWE is pretend," Fury once said. "And if a pretend fighter can come in and win the heavyweight championship of the world in what is supposed to be the ultimate fighting competition, it doesn't say a lot, does it? I haven't changed my mind, anytime, any place, anywhere, tell Dana White to bring Velasquez to me and I'll knock him into next week. As I said before, they are not on my level, they are bums compared to me."

And if the 26-year-old Fury is to make a run at the Bellator heavyweight strap, he'd better start working on his grappling game as current champion Vitaly Minakov is a Sambo Grand Master who also holds a black belt in Judo.

We, like all of you, will be monitoring this one closely.


popular
"There's times I do think I probably have let people down but in fairness, I have got good support from back home"
Goal disallowed in Dublin SFC because player wasn't wearing his gumshield
The SportsJOE 12 o'clock quiz | Day 138
All hail Alexis Sanchez, the man who played Manchester United like a piano
The SportsJOE 12 o'clock quiz | Day 137
"I was asked to be the team doctor. I thought well I'll never play senior camogie for Galway"
"That's a risk I'd be willing to take" - Byrne ready and raring for a championship
You may also like
1 month ago
Varadkar urges media and sporting bodies to have "nothing to do with" Fury/Joshua fight
1 year ago
Tyson Fury confirms date for Deontay Wilder rematch
1 year ago
Tyson Fury belts out Aerosmith and 'American Pie' after dominant TKO victory
1 year ago
"Anthony Joshua changed his stars through life" - Tyson Fury's classy response
1 year ago
Tyson Fury reveals when Deontay Wilder rematch is likely to happen
1 year ago
Tyson Fury names condition for fighting Dillian Whyte
Next Page