Tony Ferguson has seemingly forgotten how to lose.

In the UFC's deepest division, the ferocious lightweight found an extra gear at high altitude in Mexico City as he claimed a unanimous decision victory over former champion Rafael dos Anjos.

Headlining the first UFC event of his career, Ferguson showcased typical creativity and relentless forward pressure as he out-everythinged dos Anjos over 25 minutes on Saturday night.

END_OF_DOCUMENT_TOKEN_TO_BE_REPLACED

The bout essentially boiled down to a kickboxing duel between 'El Cucuy' and dos Anjos, with takedown attempts seldom rearing their heads in the main event.

Ferguson was the more creative fighter throughout, switching stances and mixing up combinations at will for five rounds.

END_OF_DOCUMENT_TOKEN_TO_BE_REPLACED

The TUF 14 winner sliced his Brazilian opponent up early on in proceedings as he utilised all 6.5 inches of his reach advantage on the night to plant his jab on the nose and soft cheek tissue of dos Anjos.

No lightweight in UFC history had ever gone on a run of nine consecutive victories before Ferguson recorded the feat in the wee hours of Sunday morning.

And depending on the results of Khabib Nurmagomedov's meeting with Michael Johnson in New York next week, we could well be looking directly at the next man in line for the winner of the lightweight title fight between Conor McGregor and Eddie Alvarez which will close out UFC 205.

It would be difficult to say that he doesn't deserve it considering this run of form. He now finds himself just behind Jon Jones and Demetrious Johnson in terms of longest winning streaks in the UFC. 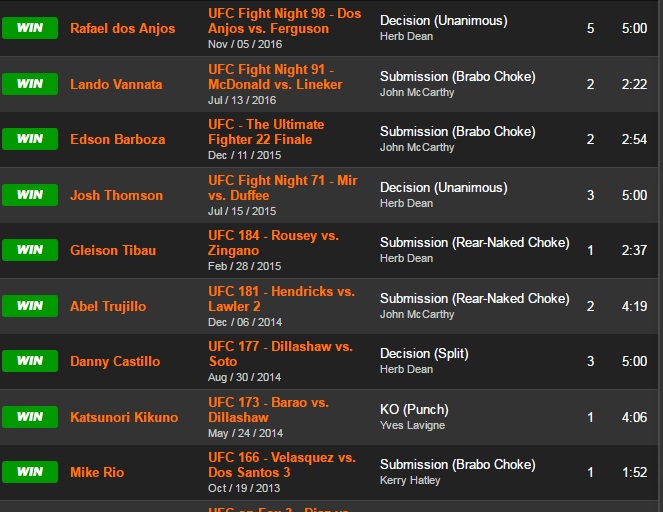 
popular
"I went up to the Italians and gave them a big auld shoulder" - Paul O'Donovan does it again
Jamie Carragher on the two Man United players Erik ten Hag can't trust
Man United have 'decided to sell' promising midfielder James Garner
Wexford Under-20 lights it up as Ferns win their first ever county title
Wexford, Waterford and Kilkenny down some good men as Australia calls
Graeme Souness under fire for calling football a ‘man’s game' while sat with Karen Carney
Luke Chadwick recalls furious Alex Ferguson reaction when he rejected loan move
You may also like
1 month ago
Jorge Masvidal speaks about defending BMF title against Conor McGregor
2 months ago
Dana White reveals who Conor McGregor could fight on UFC return
2 months ago
Your guide to a great weekend of sport and how to stream it all
2 months ago
Conor McGregor says he knows his next UFC opponent and fight date
3 months ago
Commentating cage-side, Daniel Cormier missed the UFC knock-out of the year
3 months ago
Conor McGregor responds to Michael Chandler's callout after UFC 274
Next Page