"This guy's got an issue and his name is Tony Ferguson... it's hunting season"

No better man to get the juices flowing for a big fight.

Tony Ferguson is primed for 'hunting season' and he has his sights set on UFC lightweight champion Khabib Nurmagomedov.

'El Cucuy' is on an 12-fight winning streak and has long been the No.1 contender in the 155lbs division. Ferguson's knee injury and Nurmagomedov's suspension, following the UFC 229 post-fight brawl, has drawn out this highly anticipated bout but both men have signed on for a fight, next April, at The Barclays Center in Brooklyn.

END_OF_DOCUMENT_TOKEN_TO_BE_REPLACED

The UFC has tried to get these two men in The Octagon on four occasions but injuries and weight cut issues have scuppered the best laid of plans.

Every fight fan out there will be crossing their fingers as this title fight nears and it is the fight of the first quarter of 2020. Conor McGregor is coming back against Donald Cerrone in mid January and that may sell more pay-per-views, but MMA followers will be keenly tracking Ferguson vs. Nurmagomedov as April gets ever closer.

In his first interview since signing his bout agreement, Ferguson cut one hell of a promo on Ariel Helwani's MMA Show. Dismissing the concerns of those that feel he will never step foot in The Octagon with 'The Eagle', Ferguson invited fans to get on board the train or 'go watch Bellator'.

"Don't even get the fans going on that shit," he continued. "Seriously, I love you guys and I want to set that pace right now. I want their encouragement. Everyone that's like, 'Oh this is cursed,' f*** you! Don't watch this stuff, we don't want you. Go watch Bellator or some other bullshit. Go find some knock-off copy of what we've got going on here.

"This is the O.Gs. I'm the original genius here. These guys right here, you wanna try and be gangster, or some shit like that, hey, you've got to answer to me, Khabib. Right here, toe-to-toe motherf*****. And we're gonna go." 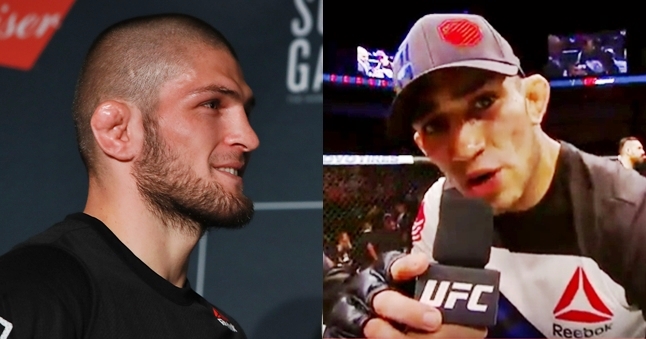 END_OF_DOCUMENT_TOKEN_TO_BE_REPLACED

Tony Ferguson, who had to pull out of a undisputed title fight against Nurmagomedov in April 2018 after tripping over a television camera cable, returned to the UFC in October 2018 and has since had two 'Fight of the Night' wins over Anthony Pettis and Donald Cerrone. In both fights, his opponent was forced to stop after sustaining a barrage of strikes from the 35-year-old.

Ferguson says he is 'going to keep poking the bear' to ensure Nurmagomedov makes it to The Octagon next April. He claims that he will make the champion bloody and that he will take him to deep, deep waters. He doubts the Dagestani will want a rematch after he finishes with him in Brooklyn.

"This guy's got an issue and his name is Tony Ferguson, and I'm coming after him. It's hunting season, baby!" He added:

END_OF_DOCUMENT_TOKEN_TO_BE_REPLACED

As for the Cerrone vs. McGregor fight, Ferguson believes 'Cowboy' could drop the Dubliner if he connects with a couple of his high kicks and he expects both men to come out guns ablazin'.


popular
Matt Williams wants two changes and Peter O'Mahony benched for Ireland vs. France
"Remember that name" - Sonny Bill Williams raves about Ireland U20 star after outrageous try assist
Peter O'Mahony reaction to Liam Williams scuffle shows he may finally be mellowing
Ireland vs Wales: All the big talking points, moments and player ratings
Two changes as familiar faces return to our Ireland team to face France
The two reasons why Aidan O'Shea's performance against Armagh was his best in ages
Allianz National League Round 2: All the action and talking points
You may also like
1 month ago
T.J. Dillashaw: Conor McGregor is right to pull out of USADA testing pool
1 month ago
Ariel Helwani shares Paddy Pimblett WhatsApp messages as spat becomes public
1 month ago
Conor McGregor savagely hits back at Joe Rogan following PED comments
3 months ago
"There’s a new Irish superstar in town" - Young Derry fighter touted for UFC after big title win
3 months ago
Conor McGregor almost unrecognisable after shaving off iconic beard
3 months ago
Dana White confirms Conor McGregor is not in the USADA testing pool
Next Page