You can't say we didn't warn you.

If Conor McGregor was looking for a reaction from his claims that Joseph Duffy isn't a really Irish, then he'll mark his diatribe on episode 300 of the MMA Hour down as a success.

The interim featherweight champion told host Ariel Helwani that he didn't see Joseph Duffy as the main event of UFC Dublin, and instead cited his three SBG teammates on the card as the real headliners. He then called the last man to beat him's Irishness into question.

"Joe is not from Dublin, he was born in Ireland, he's moved to Canada, he was in London, Wales... I don't know where the fuck he's from, but he ain't from here. He ain't never stepped foot in that arena. He ain't trained around this area."

"One year after me and him fought, he was beaten for the Cage Warriors lightweight title and he quit the sport, retired, moved country, changed teams and took up another sport. They're facts."

"Then he sees my success, he sees the Irish success even though he's off somewhere else. He's never trained in Ireland in his life and then he sees all of this, then he shaves a shamrock in his head and he calls himself 'Irish Joe' and tries to come back and capitalise off of the that and milk that."

Joseph Duffy's cousin John Joe, who's a priest in Donegal, has since responded to McGregor's claims by essentially proving that his family are more Irish than the McGregors, who ancestry can be traced back to Scotland. 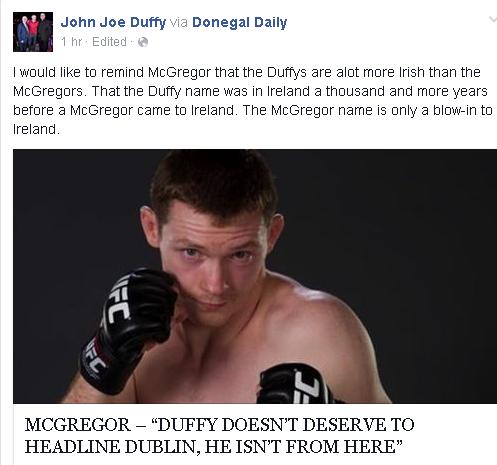 
popular
Gary Neville highlights Erik ten Hag decision that 'backfired spectacularly' at Brentford
"I've never seen anything like it" - Pitiful Manchester United reach new low at Brentford
"He can add something to our attacking line up" - Jamie Clarke signs for Northern Irish soccer club
Ranking the best county GAA songs of all-time (32-1)
"It was unfair on the Galway backs” - Tomás Ó Sé admits that Kerry benefitted from unfair rule
Erling Haaland registers strange statistic on home debut as Mark Travers keeps the City score down
"I’ve never heard someone say something as stupid” - Katie Taylor blasts Jake Paul's rematch comments
You may also like
1 month ago
Ian Garry makes American opponent rue pre-fight comments at UFC 276
1 month ago
Jorge Masvidal speaks about defending BMF title against Conor McGregor
2 months ago
Dana White reveals who Conor McGregor could fight on UFC return
2 months ago
Your guide to a great weekend of sport and how to stream it all
2 months ago
Conor McGregor says he knows his next UFC opponent and fight date
3 months ago
Commentating cage-side, Daniel Cormier missed the UFC knock-out of the year
Next Page