Both men feel they won after a five-round war. McGregor got the nod from two judges, though, and revenge was his.

As the second round of Conor McGregor's UFC 202 do-over with Nate Diaz neared its conclusion, there was only one man making things happen. The Notorious was picking Diaz apart with clean punches and crunching leg strikes.

It was an easy night for the judges. Then, Diaz got going. Sensing McGregor may be fading, he waded forward and started to make an impression. A big one.

Most fight fans, regardless of their allegiances, will agree that McGregor won Rounds 1 and 4 while Diaz clearly took Round 5. All three judges felt that McGregor had done enough to win the second.

The exchanges during the middle round were even enough. Diaz the aggressor with McGregor landing a couple of good counter-punches and elbows. The Californian won the round on all cards, though, thanks in large part to a thunderous flurry in the final moments. Diaz got McGregor up against the cage and waded in, forcing referee John McCarthy to consider stepping in.

Judge Glenn Trowbridge, however, deemed Diaz to be completely dominant in the round and scored it 10-8 to Diaz. That was the reason why he ultimately scored the contest a 47-47 draw and denied McGregor the unanimous decision. 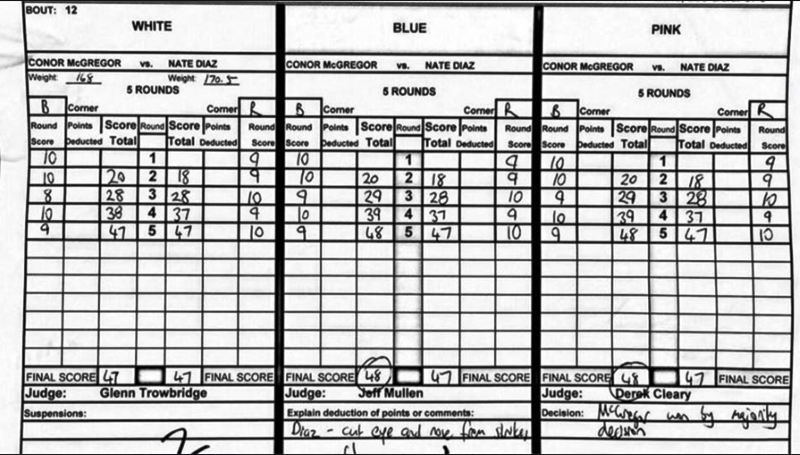 Speaking after the fight, McGregor addressed the scoring and claimed he was confident when the bout went to the scorecards. He said:

"I mean that first round, in my opinion, was a 10-8. I dropped him and it was a handy one. I would have given that round a 10-8. But, look, whatever they see, they see. I won that fight and I'm happy with it. My respect to the opponent."

As for Diaz, he felt he was the winner and had some choice words for the UFC, and the judges, after it did not go his way.


popular
Conor McGregor bought out of Proper 12 whiskey company
Longford leaving cert schools Europe's finest with measured masterclass
"No one comes into racing for money – it is a hard way to make a living" - Elliott releases heartfelt statement
QUIZ: How well do you remember the 2010 World Cup?
Ugo Monye's Lions XV features two Ireland players and Welsh captain
"There's 30 pints of Guinness on the table! The night before a World Cup quarter final"
Mike Haley magic and Bundee's blunder sees Munster reach PRO14 Final
You may also like
2 weeks ago
Dana White has settled on a contentious next fight for Conor McGregor
1 month ago
"This man ain't ready for Nurmagomedov. He ain't ready!'"
1 month ago
Conor McGregor wants immediate Dustin Poirier rematch, for UFC title
1 month ago
Daniel Cormier defends immediate reaction to shock Conor McGregor loss
1 month ago
McGregor admits shout from Dustin Poirier's corner got inside his head
1 month ago
Khabib Nurmagomedov perfectly predicted how Poirier would defeat McGregor
Next Page