Stephen 'Wonderboy' Thompson phones in on his way to a TV studio to record Family Feud (the US version of Family Fortunes) along with the likes of Henry Cejudo, Michelle Waterson and Holly Holm.

"We're representing the UFC and we're up against a boxing team," he tells us. "I know Evander Holyfield is going to be there. It should be cool."

END_OF_DOCUMENT_TOKEN_TO_BE_REPLACED

For a guy that grew up as a "dojo rat" in Simpsonville, South Carolina, back when the population was sub 10,000, flying out to Los Angeles to record a TV game-show could be way outside his comfort zone. For Thompson, though, it is all part of a crazy life journey sparked by martial arts.

"I've never been to Ireland," he says when we begin to speak about his impending appearance at Fight Con Ireland, which takes place in Cork at the end of this month. "Lots of people from Ireland have been wanting me to come over for years so I'm excited to get over there and meet my fans."

END_OF_DOCUMENT_TOKEN_TO_BE_REPLACED

The trip here will afford the 37-year-old with a mini break from rehabbing after he broke both hands in a November victory over Vicente Luque. Wins over the likes of Robert Whittaker, Johny Hendricks, Jake Ellenberger and Rory MacDonald had put him on course for the UFC welterweight title but he came up against a determined Tyron Woodley and some harsh judges.

The pair won 'Fight of the Night' at the UFC's first ever Madison Square Garden pay-per-view, back in November 2016, while the bout itself was called a draw. An immediate rematch was signed, for UFC 209 in March 2017, and despite many experts scoring it in Thompson's favour, Woodley had his arm raised.

He rebounded from that decision with a win over Jorge Masvidal before another controversial loss to Darren Till and his first ever KO at the hands of Anthony Pettis. It was eight months before he fought again but he got back in the win column with that decision win over Luque, made all the more impressive by the double injury he sustained early in the fight.

END_OF_DOCUMENT_TOKEN_TO_BE_REPLACED

Currently sixth in the UFC rankings, the South Carolinan wants a top five welterweight upon his return.

"I'm not giving up on that title," says Thompson. "I'll be back later this year and the goal is to be fighting for that belt again within 12 months." 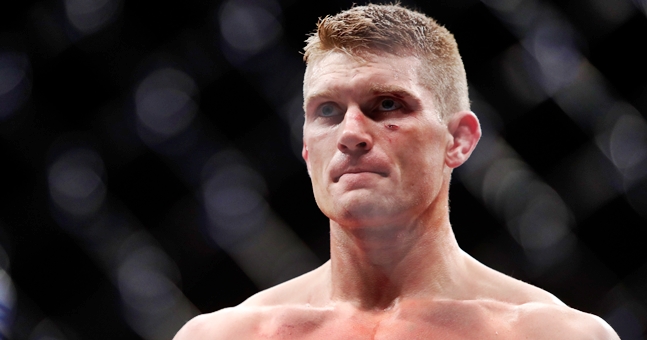 Thompson's father, Ray, fought in the 1970s and 80s and, in 1983, set up a dojo in Simpsonville. "Every day after school," he says, "you'd walk down to the gym. I started karate and kickboxing when I was three. I trained in Brazilian Jiu-Jitsu too but, back in the 80s and early 90s, the other two were more popular so I put it on the back-burner.

"I played a year of soccer when I was in high school but I was horrible. I spent more time light-kicking guys in the shin than the ball.

"My passion was martial arts but, as a kid, I hated karate. Then, one day when I was about 12, I understood how to do it all. It clicked. My dad, who was my trainer, moved me to the adult classes and I was taking on black belts and world champions. I was this shrimp so I had to find a way to deal with these bigger guys. I got my butt kicked a bit until I was about 14 and it all came together. Suddenly I was schooling these guys. My dad knew what he was doing."

From 1999, when he was 16, up to 2005, Thompson started to rack up the kickboxing wins and titles. He has a slew of American titles to his name and became cruiserweight world champion in 2003 and 2005.

What followed next was a stint in the short-lived but high-entertaining 'Chuck Norris World Combat League'. The action movie star and former karate world champion Chuck Norris lent his name to a 5-on-5 team sport that was fought in a bowl and, according to Thompson, a lot like the Jean Claude Van Damme film Bloodsport.

"It was a mix of kickboxing and Muay Thai. There were lots of knock-outs in that. 5 guys versus 5 guys and you won points for your team. Mine was the Philadelphia Fire.

"You would fight one three-minute round and if you beat your opponent within that time, a fresh guy would come out to face you. I did that one night and knocked both guys out. It was something different."

With his father still coaching him, Thompson continued to put himself into uncomfortable positions to challenge himself. "I was 58-0 in kickboxing with 48 knock-outs and, at this stage, I was training with a lot of MMA guys like Rashad Evans and Georges St-Pierre. I thought, 'Why not make the switch?'"

A couple of days before he turned 27, in February 2010, 'Wonderboy' made his Mixed Martial Arts debut against Jeremy Joles at 'Fight Party' in Greenville, South Carolina.

"I was in my late 20s and was playing catch-up. Those Fight Party events used to be packed out. You'd have 18,000 people there, standing room only. The likes of Ovince Saint-Preux and the Lima brothers all fought on those cards. Going into those first few fights, I was scared to death. I still am now. That never changes."

Five victories in 20 months saw Thompson get the call-up to the UFC and he announced himself with a head-kick KO to Dan Stittgen at UFC 143 in February 2012. His next bout would be against veteran Matt Brown. 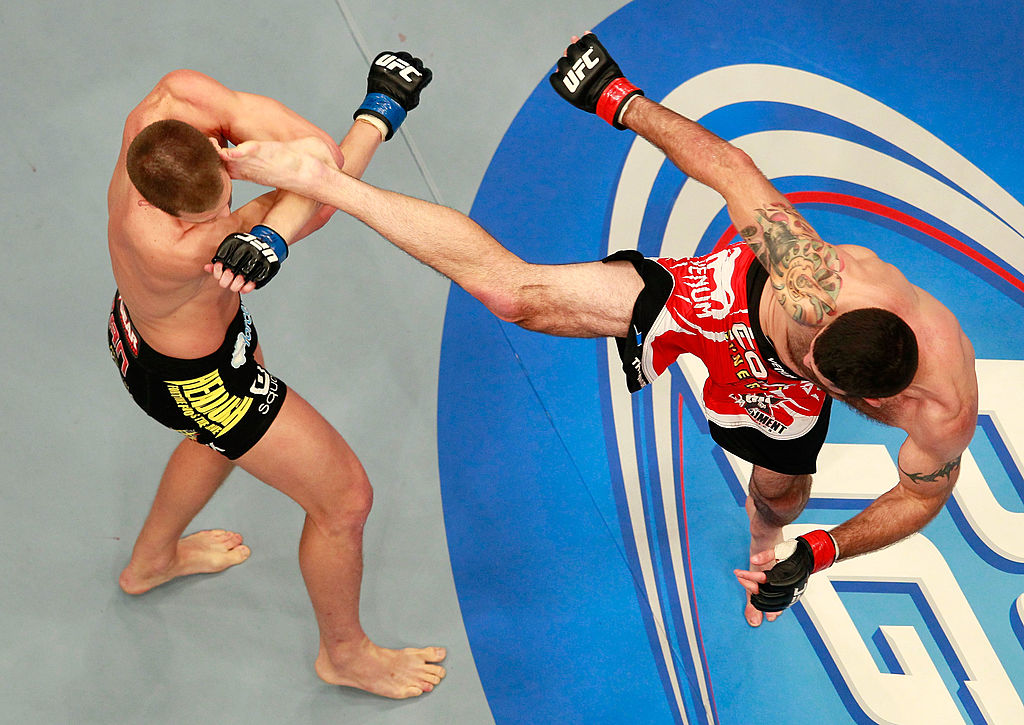 The two men emptied the tank and although he started strongly, Thompson feels Brown's brutal third round deservedly won him the day.

"We ended up sharing an ambulance together after the fight and we got chatting on our way to the hospital. We had just beaten the crap out of each other but there was so much respect there."

After 58 successive kickboxing wins and a 6-0 start to his MMA career, Thompson tasted his first defeat since he was a teenager. He responded to that loss by winning his next seven contests - taking out Whittaker and MacDonald along the way - to get himself those title shots against Woodley.

"A lot of people ask why I'm not knocking guys out as much as I used to," he says, "but what they don't realise is that you can do that to most guys on the way up. When you are in there with the top 1 or 2% it's a completely different game."

Typical of 'Wonderboy', the lead-up to the fight was lacking the snarl and bite that has characterised so many UFC bouts in recent years:

"Our first fight was an epic at Madison Square Garden. I landed a good few shots in the early rounds and he knocked me down in the fourth round. What everyone remembers was how he got me in a guillotine and how I fought my way out of that.

"I expected Tyron to be more aggressive in the rematch and so did he. It was a weird, eerie feeling to be out there. We were both feeling each other out as that was what we had trained for but nobody went all-out."

As long as Woodley was champion - and he did defend his belt four times - Thompson knew it would be tough to get another shot at the belt. He needed to get more wins and big performances. That plan started well when he out-pointed Jorge Masvidal but a trip to Liverpool to face Darren Till left him stunned. Thompson looked the better of the two fighters but Till took the unanimous decision win, with two judges scandalously scoring it 49-46 to the Liverpuddlian.

"It was one of those things. Those guys were looking to push Darren Till. He had an hour left to make weight [after missing 170lbs] and had an hour let to get it off. He came back even heavier [174.5lbs] but the UFC didn't care.

"I tore my ACL in that fight, after his side-kicks, but kept on going and landing strikes. I definitely felt I had won. The UFC wanted to push Darren Till at the time. But I felt, fighting in his home-town, that I needed to knock him out to win."

While Till went on to lose a title fight against Woodley, Thompson was on the receiving end of a highlight reel KO from Anthony Pettis. He was winning on all three judges' scorecards at the time but Pettis found a punch that changed the fight in an instant. It was the first time in his career that Thompson had been sparked.

Thompson took just over seven months to return but he did so with an impressive win over Luque, and all the more so because of his busted left and right hands.

"Making that walk is one of the most intense and personal things you can ever do. People who tell you they are not scared before a fight, they're lying to you.

"It's like riding a roller-coster or speaking in front of a large crowd, but 1,000 times that. You're in an arena and when they close the door, it's just you and him. This guy is getting ready to do damage.

"It's not like you have a team to blend in with. It's you and him. Thousands are out there either screaming for you or wanting to see you get hurt.

"Win or lose, you learn something about the other guy when you fight. At the end, though, there's respect. Always respect."

Our call ends with Thompson gushing about the most important thing in his life right now - the new Upstate Karate facility, still run by his father Ray, at Simpsonville, South Carolina.

With that, we leave 'Wonderboy' to brush up on his trivia before he heads off for a different type of feud.