Tyron Woodley is still the UFC welterweight champion but he was very, very lucky to retain his belt.

'The Chosen One' took a split decision victory over Stephen Thompson in the UFC 209 headliner but the announcement was met with a chorus of boos and consternation in the fight community and online.

END_OF_DOCUMENT_TOKEN_TO_BE_REPLACED

Thompson was the aggressor for most of what was a cagey fight. He pressed Woodley back against the fence and landed some lusty kicks to the champion's head and body.

All three judges agreed that Thompson won the opening round but two of them - Derek Cleary and Chris Lee - awarded the second to Woodley. There were no complaints about the third as Woodley scored a big take-down and did some damage to the challenger on the deck.

Again, though, all three judges went in 'Wonderboy's' favour for the fourth as he rebounded well and landed one punishing head-kick. Woodley's corner were so concerned that their man was behind that his advice before the final round was that he needed to knock Thompson out.

He came damn close in the final minute with a brutal combination that floored Thompson and forced him to shell up on the ground, and scramble, to survive. Still, the champion looked extremely worried as the split decision was announced. It was not until 'AND STILL!' was announced by Bruce Buffer that he could relax. 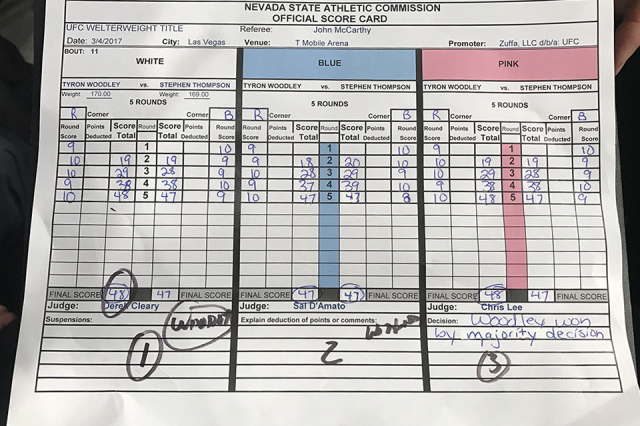 END_OF_DOCUMENT_TOKEN_TO_BE_REPLACED

Sal D'Amato, the only judge that scored the contest a draw, harshly went 10-8 against Thompson for that fateful final round. The other two judges went 48-47 in Woodley's favour. It was a score that UFC president Dana White feels should have been reversed.

Classy act that he is, Thompson took the loss on the chin despite his strong belief that he won the fight. He said:

"I could have done a little more out there but what happened happened and I've got to move on from there.

He continued, "I took a big shot in my last fight and two big shots after that. I want to go back with my coaches and talk wit the UFC; see what's next. But yeah man, if they are willing to get me out there again, I'm ready."

He must be absolutely gutted but Thompson is handling his controversial loss with a champion's grace.