It looks like Dominick Cruz was right about Mackenzie Dern missing weight at UFC 224.

Prior to UFC 224, Dominick Cruz claimed that Mackenzie Dern coming in seven pounds over the strawweight limit for her bout against Amanda Cooper was 'kind of intelligent.' The reasoning behind his bold statement - 'because wins matter more than anything.'

It's pretty hard to argue against that, given the evidence.

END_OF_DOCUMENT_TOKEN_TO_BE_REPLACED

Even factoring in the financial cost and reputational damage, Dern emerged from UFC 224 as a winner. She got that slick first-round submission victory that didn't come in her promotional debut. Although she forfeited 30% of her show money and 15% of her win bonus to Cooper, she still walked away with a payday just shy of $50,000. Despite beating Cooper in a catchweight contest, the win was enough to see her enter the strawweight rankings in the new update. 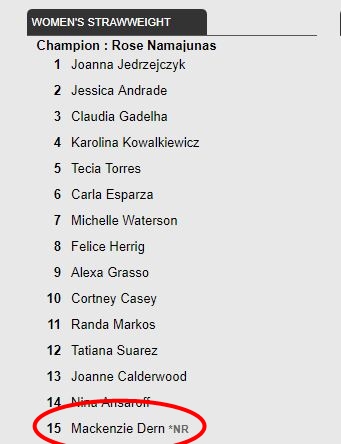 Dern revealed this week, that when she arrived in Brazil, she was essentially a featherweight. She tipped the scales at a whopping 139.5 lbs when she touched down in Rio. Had the commission followed through with pulling her from the card, it all could have played out very differently for her.

END_OF_DOCUMENT_TOKEN_TO_BE_REPLACED

One thing's for sure, Rose Namajunas wouldn't be talking about her if she didn't compete at UFC 224. The women's strawweight queen admitted on UFC Unfiltered that she would love to test her ground game against the multiple Brazilian jiu-jitsu world champion... someday.

"Other than the weight issue, I thought she looked great. That is something, I’ve always wanted to test my jiu-jitsu against, that would be awesome, I would like to face her. But, she just has together shit together and that may be down the road."

"She beat Gabi Garcia in a jiu-jitsu match, so that would be awesome. And she can obviously strike a little bit. She has that heavy first step, that a wrestler has sometimes that good right hand. You can tell she has that style developing. So it will be interesting to see if she can fix her issues and maybe she can be a future contender.”

That being said, Namajunas was pretty critical of Dern's attempt to make weight.

"I don’t know what kind of consequences, but I hope that it’s something that’s like. Come on, girl. Come on, girl... You didn’t even have abs, girl, like, come on.”

Dern is already 15th after two wins in the Octagon. If she continues racking up those victories, our fears about her being fast-tracked into a title shot may materialise.