Mackenzie Dern got the dominant win she wanted at UFC 224, but it won't be enough to convert the doubters.

Whenever a fighter enters the UFC with as much hype as Mackenzie Dern did, their abilities will always be questioned. She did little silence the detractors in her promotional debut, which she took via split decision against Ashley Yoder at UFC 22.

Dern was criticised for her lack of standup skills against Yoder, but she looked considerably better in this department against Amanda Bobby Cooper at UFC 224. The Brazilian Jiu-Jitsu star consistently landed the overhand right and ended up dropping her with that punch. From there, it was child's play for Dern as she quickly transitioned before locking in the rear-naked choke.

The tapout at 2:27 of the opening round saw Dern improve her pristine record to 7-0. It also marked her fourth submission victory. Meanwhile, Cooper fell to 3-4 with all her losses coming by way of submission.

Mackenzie Dern with the nasty right hand and quick rear naked choke. Despite the missed weight, what a showing. #UFC224 pic.twitter.com/p2Q5Rq8NBw

Fuel for the haters

The striking and the slick finish will be overshadowed by Dern weight-cut issues. She came in seven pounds over the strawweight limit and was forced to forfeit 30% of her show money to Cooper. Former UFC bantamweight king Dominick Cruz claimed that it 'almost seemed intentional' during Fox's coverage of the card.

"You get people who miss weight, that's regular. When you miss by half a pound, 0.2, maybe even a pond I'll give you somewhat of a pass, but seven pounds almost seems intentional. It almost seems like a gameplan. It almost seems intelligent. If your biggest base is grappling and you get a 10 lb advantage in grappling, just in wrestling alone what kind of advantage does that give you Tyron? It's actually kind of intelligent because wins matter more than anything."

"I second that this is a disgrace and I will add to that not only should 30% be taken away from her show, she should actually forfeit her win bonus."

END_OF_DOCUMENT_TOKEN_TO_BE_REPLACED

Meanwhile, top strawweight contender Claudia Gadelha was also firing shots at Dern on Instagram. She has since edited the post, but she scored a sneaky dig in the caption of a selfie showing her preparations for her next bout. She faces former champion Carla Esparza at UFC 225. 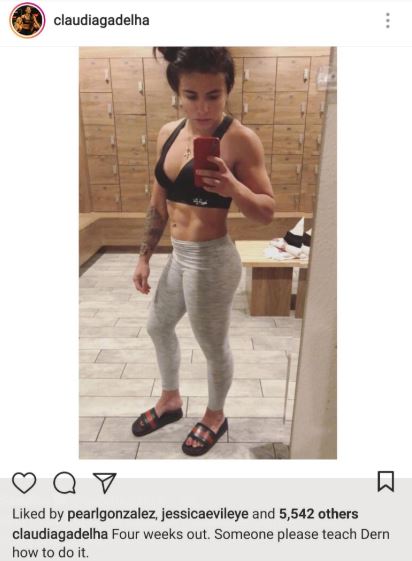 
popular
The FootballJOE Pub Quiz: Week 11
Man United's tactical issues summed up in six shocking screenshots
O'Hora and Keegan hammer into each other, both of them only revelling in it
McBrearty has dramatic equaliser ruled out as Naomh Conaill win Donegal grudge game
Jesse Lingard seeks to clear up what United fan shouted when he was warming up
Manchester United players 'lose faith' in Solskjaer after Liverpool pasting
Liverpool's half-time words in Old Trafford dressing room will please fans greatly
You may also like
1 week ago
José Mourinho swaps Conor McGregor a Roma jersey for some whiskey
2 months ago
Joe Rogan sends McGregor invitation after explaining that post-fight interview
2 months ago
Conor McGregor deletes series of tweets aimed at Poirier and Khabib
3 months ago
UFC appears to have signed a new Irish fighter
3 months ago
Conor McGregor labelled an 'easy payday' who can't compete with top UFC fighters anymore
3 months ago
Khabib says McGregor is "finished" as Dos Anjos makes his play
Next Page