There is nothing particularly surprising about the Rose Namajunas diet.

In fact, it would be unfair to label what Rose Namajunas eats day-to-day as a diet per se. It may be a cliche, but what the UFC strawweight champion eats really is more of a lifestyle than a diet.

During a recent appearance on the Joe Rogan Experience MMA Show, 'Thug Rose' broke down what she eats. There's nothing out of the ordinary. She simply tries to eat fresh and steer clear of sugar.

"I try and make everything homemade as possible. So that's kind of my thing. I'm never 'anti' anything, except for lots of sugar and things that are obviously bad for you. The more process that something takes in order to make from scratch, I think the less you should eat it." 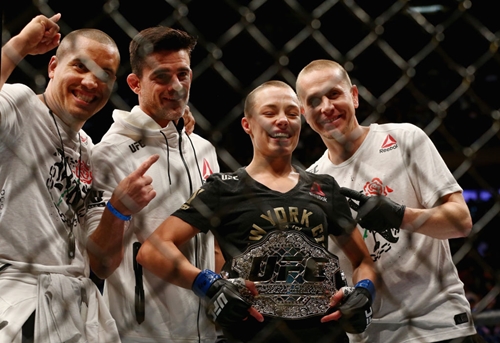 One food she believes people should avoid eating too much of is bread. Considering how long the process of making bread takes, Namajunas thinks that it shouldn't be part of someone's daily meal plans.

"You know, something like bread. If you do it from scratch you have to make your own starter culture. That takes a week by itself. Then you have to add more flour and water to it over time. That takes another two weeks. So you shouldn't be eating bread every day."

"If you have a garden, you got tomatoes which we grew in the last camp. You could just eat those real easy because you can just pick it if you need it."

Namajunas traces her dislike for sweets back to her childhood. Sugary snacks weren't the norm in her family home growing up and it's not something she's warmed to in adult life.

"I try not to be too scientific with stuff. Whatever makes you feel good I think is what you should eat. I don't like sweets or anything like that. My parents are Lithuanian refugees. We grew up eating sauerkraut and potatoes. You know, just real Eastern European type stuff. I never really liked candy or anything like that. It's always been a lifestyle for me and not like I'm on this diet like this thing I have to do."

Eat clean, avoid the bad stuff and try to make as much of your food from scratch as possible. That's how the undisputed strawweight queen stays lean and ready for war. Simple as.


popular
"I never really cried or got emotional over what I've done as an individual. I couldn't give a s***"
"If I break my wrist, it's on f***ing both of you." - Koepka and Berger act the spoiled child
"I was off the grid" - Aidan O'Shea respond's to Mayo criticism after club championship win
The FootballJOE Pub Quiz: Week 7
'I won The Open by six shots in my home country, but this was the best week of my golfing career'
Garry Ringrose raves about four young Leinster stars to watch this season
Galway fans' frosty reception for Davy Fitz doesn't make any sense
You may also like
2 months ago
Conor McGregor deletes series of tweets aimed at Poirier and Khabib
2 months ago
UFC appears to have signed a new Irish fighter
2 months ago
Conor McGregor labelled an 'easy payday' who can't compete with top UFC fighters anymore
2 months ago
Khabib says McGregor is "finished" as Dos Anjos makes his play
2 months ago
Shocking post-fight footage shows McGregor threat that upset Poirier so much
2 months ago
Conor McGregor posts first Instagram since last night's defeat
Next Page