Rose Namajunas is very sceptical about that message she received from Conor McGregor.

UFC strawweight champion Rose Namajunas was one of the passengers on the bus that Conor McGregor and his crew attacked on UFC 223 media day. Michael Chiesa and Ray Borg were ultimately removed due to injuries sustained from the shattered glass caused by the dolly thrown by 'The Notorious'. Although Namajunas wasn't physically hurt, the incident clearly had an impact on her.

Immediately after the attack, UFC president told reporters that she was 'very upset'. Namajunas soldiered on and successfully defended her title against former champion Joanna Jedrzejczyk. In the post-fight press conference, she admitted that the incident left her shaken up.

White confirmed at the same presser that he had been in contact with McGregor. According to the president, McGregor reached out to apologise to Namajunas, Chiesa and UFC strawweight contender Karolina Kowalkiewicz to offer his apologies.

Namajunas confirmed on the Ariel Helwani MMA Show on ESPN that she received an apology from 'The Notorious' via Instagram direct message. However, she didn't consider it to be a 'real apology'.

"I did get an Instagram message from him, but I don't really know if it was even him. It just didn't seem like a sincere apology from an actual person. To me, I didn't really consider it a real apology."

“It said, ‘I’m sorry for what happened,’ and then it was like, but then he immediately went on to like justifying what he did and stuff like that and the reasons why he did it. That to me, it really doesn’t matter. I don’t care what beef he’s got with who. That’s none of my business, I don’t need to know that information. Do you know what I mean? That doesn’t do anything for me.” 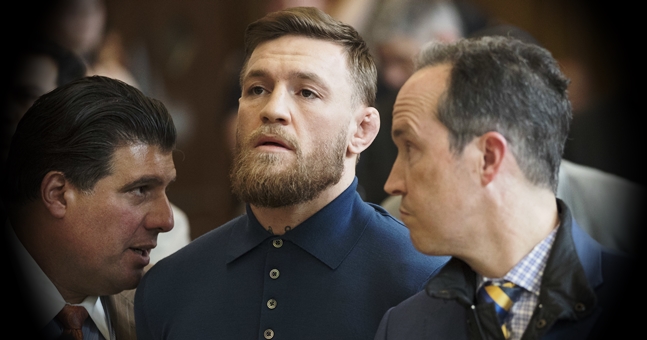 Rarely does Namajunas not accept an apology. However, this one just didn't sit well with her. Mainly because of how impersonal it was. So she responded with two words along with her coach and long-term partner Pat Barry's phone number.

“So there was an apology and I’m a pretty cool person and I always accept apologies, but to me, I’m like a personal person, I like face to face... That’s how I like to handle things... I feel like anything can be worked out, you just gotta talk through it as adults.”

"Yeah (I responded to it). I said, 'Fuck that'. I said call Pat (Barry) -  I just put Pat’s phone number and said, ‘fuck that’ to whatever your message is and call him.”

Two and a half months later, Namajunas is still feeling the effects of the incident. She confessed to finding it difficult to even leave the house.

“No, man. When we got back home, we stayed upstairs, locked in our room because we were just paranoid about how crazy the week was. It was really tough. I’m still trying not to leave the house too much or there will be times when I’m just like, ‘Yeah we should just go home,’ like I just have a weird feeling. I live in a very nice neighborhood, there’s nothing that really goes on around here. So, for me to be like sketch. … I’m still paranoid about everything. I have a therapist that I go see.”

Perhaps a face-to-face apology is in order to mend this fence.