SBG's Richard Kiely claims he beat Lorenz Larkin up so much in Tallaght, he was asked to take the video down

Dublin's Richard Kiely has come out of retirement to sign with Bellator.

SBG welterweight Richard Kiely only retired from MMA in May but on Wednesday, it was announced that the Tallaght man had joined Bellator's stacked welterweight division.

The promotion recently announced a 170 lb Grand Prix featuring champions past and present such as Rory MacDonald, Douglas Lima and Andrey Koreshkov. In his own words, 2-1 Kiely is still in his infancy as an MMA fighter. However, the former kickboxing standout believes he has the requisite skillset to finish some marquee names in the tournament.

"Paul Daley and MVP are one dimensional. In a stand-up fight, I'd spark them. Lorenz Larkin, he already got sparked by Daley, I'd spark him as well. Rory MacDonald's a really well-rounded fighter. There's a lot of things I'd need to work on there to fight him, but a few fights in, he could get sparked as well. On the feet, I'd destroy him."

"Obviously, there's Terrence Brazier as well, the hide-and-seek champion of BAMMA. If he ever comes out of hiding I'd actually bitch-slap him, I'd beat him open-handed. I'd give him the hairy side of the hand to knock him out. He was able to hide at BAMMA because he was able to call the shots. In Bellator, he won't be able to hide."

This incredible self-confidence was only amplified when Kiely had the opportunity to spar with Lorenz Larkin when the Bellator star was in Dublin. The former UFC fighter has wins over Robbie Lawler, Santiago Ponzinibbio, Jorge Masvidal and Neil Magny, but apparently, he was no match for a hungover Kiely in the gym.

"Lorenz Larkin came over to SBG Tallaght. I got called up an hour beforehand. I was on the piss the night before, I turned up hungover. He was 100 kg and definitely on the medicinal supplements and I beat the shit out of him. I have the video to prove it. I'd knock him out as well."

Kiely claimed that Larkin outweighed him by 15kg. The video he put up on social media was a few rounds into the session and he feels it didn't do the beatdown justice. However, Larkin still supposedly asked him to take it down.

"If that's the standard of the Grand Prix tournament, imagine what I'm going to do to that welterweight roster when I get in there in-shape, fight fit, no injuries and at the same weight."

Here's the video Larkin supposedly asked to be taken down. Kiely said it doesn't do it justice. pic.twitter.com/hOlxWaGF4q

END_OF_DOCUMENT_TOKEN_TO_BE_REPLACED

The last time we saw Kiely inside a cage, he was being carried out of it by John Kavanagh after suffering a first-round kneebar loss to Alex Lohore at BAMMA 32. He took that fight on short notice after 'completely tearing' his cruciate ligament four weeks before the title fight. Also, he was only four weeks out of a cast after breaking his hand in his highlight reel knockout of Daniel Olejniczak at BAMMA 30.

After doing rehab and recovery with the help of Sean Hardy at Back to Basics Fitness, Kiely claims he's back kicking and dancing again. He's chomping at the bit to get into that Bellator cage.

"There were no fights in BAMMA that really interested me, to be honest. Then Bellator were sniffing around. They came along, they knew a good thing when they saw it. And I want to test myself against the best fighters in the world. There are guys there that I think I can take their chin off -  Daley, MVP, Terrence Brazier... all those guys. I'd put any of them asleep. That's not just fighters' speak. I'm happy to say that my striking level is the best in Bellator. My accomplishments in kickboxing speak for themselves and then I transitioned into MMA. The guys in Bellator won't know what hit them when I get in there."

"The only person out there who has a similar fighting style is MVP but he's one dimensional. He can only fight from distance, I can fight in close. He's a points fighter that's after transitioning. If you stand off him, grand, you make him look good. Put the pressure on him, mix it up with him, it would be a different story." 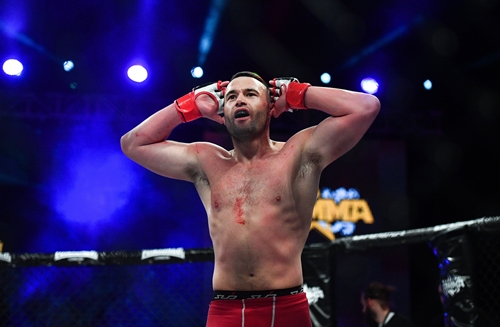 All bark and no bite?

SBG have found themselves beefing with Pitbull Brothers team, another gym that's very prevalent in Bellator. Patricio 'Pitbull' Freire, Bellator's current featherweight champion, told SportsJOE that his team would be more than willing to accept a gym vs gym challenge against their Irish rivals.

Kiely is sceptical, but if that's what they want, he doesn't believe it will work out well for them.

"I'll stick a flea collar on them, give them a fucking boot up the hole and stick them out in the fucking doghouse if they want. That's bullshit. They're just trying to allign their names with SBG. Brian Moore has called them out, James Gallagher has said that he'd fight as well. If they want to get a hiding, fair enough. They're just looking for a payday. I'm not sure if their payday would be able to cover their medical bills. I'll put manners on them."

“ I don't care if he's ready for a title fight or not, I'd fuck him up." @PatricioPitbull on @StrabanimalMMA @BellatorMMA @SBG_Ireland https://t.co/XukZcIdjhV

Kiely joins fellow SBG fighters James Gallagher, Dillon Danis, Will Fleury, Brian Moore and Charlie Ward on Bellator's books. He believes if the promotion had any sense, they'd be snapping up more names for the world famous gym.

"We've got world class fighters in our gym. If Bellator were in any way clever, they should sign more of them. There's Kiefer Crosbie, Cian Cowley's coming up, Dylan Tuke - we've got a load of guys and some of them haven't even hit their stride yet. They're only in their infancy."


popular
Noel Gallagher left 'covered in blood' after headbutt from Ruben Dias’ dad
Cutting through the contradictions from one of the worst television segments of the year
Aiden McGeady details the abuse he suffered after playing for Ireland instead of Scotland
BBC apologise after accidentally posting mocking Man United message live on TV
Roy Keane shows great comic timing after Jack Grealish party invite
France the sore losers as Ireland Men reach first ever Sevens World Series final
The FootballJOE Pub Quiz: Week 38
You may also like
2 years ago
James Haskell responds to MMA call-outs by Neil Best and Andy Powell
2 years ago
James Gallagher set to headline Bellator show in Dublin
2 years ago
'I really think that me and Ben Askren are gonna fight' - Dillon Danis
2 years ago
'Bellator has a Dublin show in September so I'm thinking of bothering them about it' - Heather Hardy
2 years ago
'Katie's an Olympic gold medallist who unified the belts but is not getting paid like a man'
2 years ago
Conor McGregor proved Dillon Danis' inspiration after awful knee injury
Next Page