Remarkably, one fighter competed at Bellator 170 with a stab wound

How on Earth was Christian Gonzalez given the go-ahead to fight at Bellator 170?

The American welterweight suffered his first loss as a professional against Danial Rodriguez in the opening bout of the Spike.com preliminary card on Saturday night. Both fighters entered with pristine 2-0 records, but only Rodriguez exited the cage still undefeated after scoring a TKO in the second round.

Gonzalez earned a disclosed purse of just $1,350 for the defeat after being forced to forfeit 20% of his pay for missing weight. His opponent took home $3,075 for the knockout win. 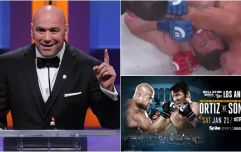 Was Tito Ortiz vs. Chael Sonnen fixed? Dana White offers his take on the tap

END_OF_DOCUMENT_TOKEN_TO_BE_REPLACED

The medical suspensions for the event, obtained by MMA Fighting, revealed that Gonzalez was harbouring a worrying injury going into the fight. He received an indefinite suspension due to an “unreported stab wound,” according to information released by the California State Athletic Commission.

Gonzalez also had chest pain and will be out of action for at least 45 days. He, along with Brennan Ward - who suffered a gruesome eye injury after being brutally knocked out by Paul Daley in the co-main event - will require medical and commission clearance before being allowed to fight again.

Chael Sonnen, who lost to the retiring Tito Ortiz in the headline act will only require the seven-day mandatory test before being allowed to return to active competition. He suffered a first round submission to the Huntington Beach Bad Boy.


popular
January transfer window 2023: Follow the latest updates live in our hub
CCCC order replay of All-Ireland club football final
Shane Lowry confirms amicable split from caddie after four and a half year partnership
Owen Farrell praises Johnny Sexton in revealing interview ahead of Six Nations
British publication urges Gareth Southgate to claim Evan Ferguson for England
"It's crazy to think Bundee Aki might come straight in and start against Wales"
Two Ireland stars included in Premier League's 'young English XI'
You may also like
6 years ago
GRAPHIC: Brennan Ward's eye in an absolutely gut-churning state following Paul Daley's flying knee knockout
6 years ago
WATCH: Knockout monster Paul Daley brutally knocks out Brennan Ward with ferocious flying knee
6 years ago
WATCH: A lot of fans thought Tito Ortiz vs Chael Sonnen was a fix
6 years ago
Chael Sonnen references Jenna Jameson in one of most savage pieces of trash talk ever
6 years ago
Chael Sonnen storms out of MMA Fighting interview ahead of Bellator debut
6 years ago
Chael Sonnen recounting promise he never kept to late father may be his most heartbreaking moment ever
Next Page