Conor McGregor vs. Nate Diaz II is going to go down as one of the fights of the year, there's no doubt about that.

It was always going to be difficult for the big-money rematch to live up to the hype thrust upon it by the months of trash-talk and the outcome of the fighters' first meeting.

But the main event of UFC 202 delivered in style as both McGregor and Diaz left everything they had on the Octagon mat in a thrilling, back-and-forth, razor close encounter. 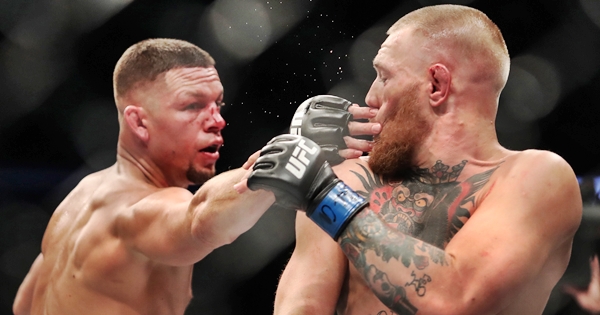 END_OF_DOCUMENT_TOKEN_TO_BE_REPLACED

However, unlike the majority of its spectators, Rafael dos Anjos wasn't enthralled by the five-round fight.

The former UFC lightweight champion, who has history with both men after beating Diaz in 2014 and being scheduled to face 'The Notorious' in March, revealed during an interview on The MMA Hour that he doesn't agree with the awed public on the exciting nature of the grudge match.

Dos Anjos said: "I think most of the people watched MMA for the first time that day and they think that [was an exciting fight]. I just saw two sloppy guys after the second round and the fight got so sloppy and I didn't see the best fight of all time at all. It is what it is.

END_OF_DOCUMENT_TOKEN_TO_BE_REPLACED

"The first round was good. Conor dropped Nate a couple of times but I didn't see like 'Oh what an exciting fight!' I didn't see it that way.

END_OF_DOCUMENT_TOKEN_TO_BE_REPLACED

And in terms of scoring, dos Anjos feels that the judges on the night got it wrong as the Brazilian believes that the Stockton fighter deserved to get the nod on the scorecards.

"I think I had Conor on the first and the second. I think the rest was Nate."

Dos Anjos, slated to face Tony Ferguson in November, is not a fan of the talk that suggests that next up for the Irishman is a shot at the 155lb title.

The former champion reckons he should be top of the queue and get a rematch against Eddie Alvarez, the man who dethroned him last month, and he went on to explain why he feels that McGregor would struggle against a fighter like Alvarez.

"Eddie has more weapons than Conor," he said. "He can grapple, he has better wrestling than Nate. Everybody saw that Nate is a tough guy and has a hell of a big heart but Nate, he's kind of limited. He has good boxing and a good ground game but he doesn't have takedowns and doesn't have kicks.

"Eddie has good wrestling, good boxing and he kicks too. I think Eddie can give Conor a hard time."