MMA fans in Ireland and across the world are in mourning following confirmation that Joao Carvalho has passed away from injuries sustained in a cage fighting event in Dublin last weekend.

The Portuguese fighter was in action on Saturday night against Charlie Ward at the Total Extreme Fighting event at the National Stadium.

He lost the match by TKO, but shortly afterwards complained of feeling ill and was rushed to Beaumont Hospital where he died late Monday night.

His team Nobrega confirmed the sad news on their Facebook page this morning: 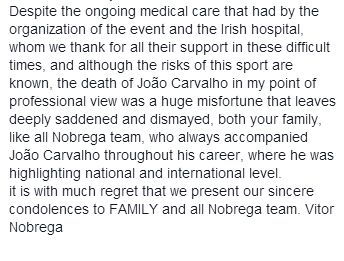 The statement, translated to English, in full reads:

"Note death The Nobrega Team comes this way confirm the death of her athlete Joao Carvalho,at the Beaumont Hospital in Dublin by 21:35 hours. It is with great dismay and sadness that we write these words, saying that the death of the athlete João Carvalho happened after 48 hours in critical condition. During the TEF-MMA event, held on Saturday at the National Boxing Stadium in Dublin, where all safety rules are met, and after a match where the arbitration followed all the correct procedures and customary, the athlete John "Shaggy Dog" Carvalho felt bad, about 20 minutes after the end of combat.

"Still on the site he was immediately assisted by the medical team present, and then quickly transported to the Beaumont Hospital, where he underwent a brain surgery, after which the athlete remained in critical condition during the next 48 hours, died this Monday the 21:35 hours.

"Despite the ongoing medical care that had by the organization of the event and the Irish hospital, whom we thank for all their support in these difficult times, and although the risks of this sport are known, the death of João Carvalho in my point of professional view was a huge misfortune that leaves deeply saddened and dismayed, both your family, like all Nobrega team, who always accompanied João Carvalho throughout his career, where he was highlighting national and international level. 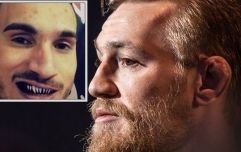 END_OF_DOCUMENT_TOKEN_TO_BE_REPLACED

"It is with much regret that we present our sincere condolences to FAMILY and all Nobrega team. Vitor Nobrega."

Cesar Silva, the CEO of TEF said “ “We extend our most sincere condolences to the family of João Carvalho’s and his teammates in Team Nobrega. Our thoughts and prayers are with them. We’d also like to thank all sports fans for their concern and support.  We will give whatever support we can to Joao’s family.”

“We have been in contact with his family and they have requested that we all understand their need for privacy at this difficult time.”


popular
Galway fans' frosty reception for Davy Fitz doesn't make any sense
The most Stone Age tackle you've ever seen gets South African lock straight red card
Ole Solskjaer hits back at Rio Ferdinand's Ronaldo comments
When Liam Brady lit into Brian Clough for his dismissive Mick McCarthy comments
'Brian was a genius... he would've killed you to even win a game of touch'
Ryan Manning hacked to the ground by Henri Lansbury in ruthless assault
Former Antrim captain Anto Finnegan has passed away
You may also like
5 years ago
Ariel Helwani believes Joao Carvalho's death may have been a factor in Conor McGregor's retirement tweet
5 years ago
Joao Carvalho's brother appears on Prime Time and reveals that "no one gives us answers"
5 years ago
COMMENT: MMA is used to fighting falsehoods but the conversation since Joao Carvalho's death has been risible
5 years ago
Dublin undertaker agrees to pay for the return of Joao Carvalho's body to Portugal
5 years ago
Joe Brolly's Twitter notifications will have been a mixed bag after his column on MMA
5 years ago
Dana White talks about preventing death and serious injury in MMA, following Joao Carvalho's death
Next Page