PICS: Anthony Pettis looking a shadow of himself ahead of UFC featherweight debut

Showtime is a man that cares about looking good and how he looks.

END_OF_DOCUMENT_TOKEN_TO_BE_REPLACED

Ever since he landed in World Extreme Cagefighting, in 2009, Anthony Pettis has been one to watch. He stormed to a 13-1 record before Clay Guida defeated him in TUF [Lesnar v dos Santos] in 2011.

He then went on a five-fight win streak that accounted for the likes of Gilbert Melendez, Donald Cerrone, Benson Henderson and won him the UFC Lightweight belt. Then, the wheels came off.

Three successive losses have seen him drop to No.7 in the lightweight rankings and now testing himself in the featherweight division. Conor McGregor's division.

However, for a man that walks around close to 170 lbs, the cut for UFC Vancouver, this Saturday, has had a drastic effect on his body.

Pettis will fight Charles Oliveira at 145 lbs and looked a shadow of his usual self when interviewed ahead of the fight for UFC on FOX. 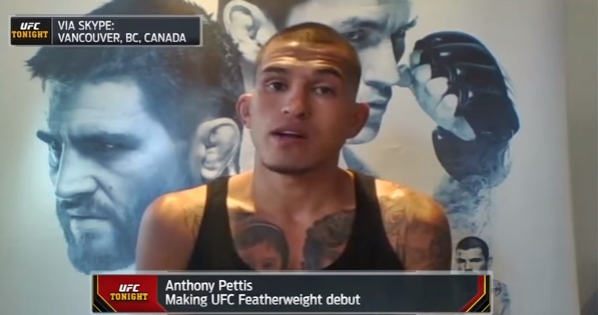 END_OF_DOCUMENT_TOKEN_TO_BE_REPLACED

"I'm feeling good. The weight cut was a big process...

"I'm in this organisation to be a champion and I feel like at 155 lbs I lost to Eddie Alvarez, the champ, Rafael dos Anjos, the champ, and Edson Barboza, who will probably get a title shot. I feel 145 will open a new path. It's a whole new division of guys I can get matched up with."

"Two division champ, sounds good to me," he said.

Pettis v Oliveira will serve as the scene-setter for a main event that features Demian Maia versus Carlos Condit.


popular
World Cup 2022 Day 12: All the major action and talking points
France demand FIFA change result of World Cup defeat over 'rule break'
Damien Duff makes 'brutally honest' England World Cup prediction after Wales win
Cristiano Ronaldo 'agrees £173m-a-year deal' with Saudi club
"Nowadays, even if I don't hit a ball, I don't care as long as we win" - Gleeson learning from the past
Castleknock's Warnock the hero as Maynooth win first ever Ryan Cup final
Thibaut Courtois warns teammates after leaks emerge from Belgium camp
You may also like
2 months ago
Hasbulla signs five year deal with UFC 'worth more than many fighters'
2 months ago
UFC fighter Elias Theodorou has died, aged just 34
2 months ago
John Kavanagh and Johnny Walker kicked out of T-Mobile Arena during UFC 279 main card
2 months ago
Conor McGregor took exception to one part of Nate Diaz victory speech
2 months ago
Nate Diaz and Tony Ferguson tossed together for UFC 279 main event after wild 24 hours
3 months ago
Your guide to a huge weekend of sport and how to watch it all
Next Page