"I'd rather my mate cry on my shoulder than go to his funeral next week."

Paddy Pimblett had the O2 Arena rocking, heaving and then welling up after another impressive victory, followed by an emotional and powerful interview with Michael Bisping.

'The Baddy' [18-3] made good on his pre-fight predictions to see off American fighter Jordan Leavitt [10-1]. Leavitt is a decent grappler and had the Liverpudlian down on a couple of occasions, finishing strong at the end of the first round.

He proved that Pimblett should not underestimate him in the second round, until he copped a knee to the head and was stunned. The 27-year-old pounced and locked in a choke-hold that forced a tap for a submission win that bumps him to 19-3. 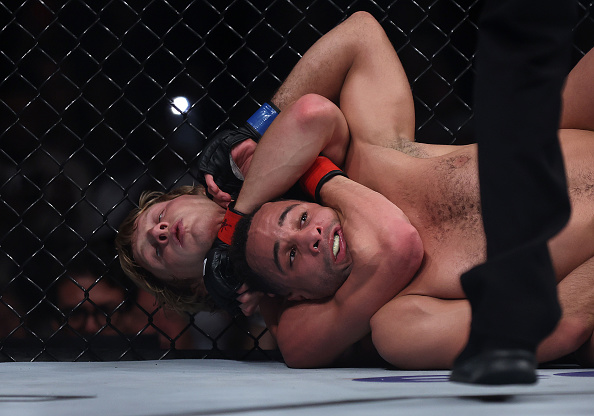 END_OF_DOCUMENT_TOKEN_TO_BE_REPLACED

Just like fellow Merseysider Molly MccCan had done after her KO victory, Pimblett dedicated his win to four-year-old Lee Joshua Hodgson, who recently passed away from complications due to metastatic rhabdomyosarcoma alveolar (ARMS), a soft tissue disease.

"I want to dedicate this fight to little baby Lee," said Pimblett, "he's a little warrior. More of a fighter than any of us will ever be."

Following that, Pimblett delivered a heartfelt message abour men's mental health, after the death by suicide of a close friend. He commented:

"I woke up on Friday morning at 4am to a message that one of my friends, back home, had [died]. This was five hours before my weigh-in. So Ricky lad, that's for you

"But, there's a stigma in this world that men can't talk. Listen, if you're a man and you've got weight on your shoulders, and you think the only way you can solve it is by [suicide], please speak to someone, speak to anyone. People would rather... I know I'd rather my mate cry on my shoulder than go to his funeral next week.

"So, please, let's get rid of this stigma and MEN, START TALKING!"

END_OF_DOCUMENT_TOKEN_TO_BE_REPLACED

That raw, touching speech from Paddy Pimblett drew a huge response from the crowd, with the fighter backing away to be consoled by his team.

As he left the fight arena, heading back-stage, Pimblett was openly crying, with fans applauding him and cheering him on.

The main event of UFC London lasted only 16 seconds as Curtis Blaydes was awarded a'KO' win over Tom Aspinall when the Salford fighter popped his knee and could not continue.


popular
Antonio Conte 'banishes' four Tottenham players from first-team
"He can add something to our attacking line up" - Jamie Clarke signs for Northern Irish soccer club
Ranking the best county GAA songs of all-time (32-1)
"I’ve never heard someone say something as stupid” - Katie Taylor blasts Jake Paul's rematch comments
Barcelona allowed to register four new signings, but Jules Kounde misses out
Roy Keane makes three surprise picks in Man United's greatest Premier League team
"It was unfair on the Galway backs” - Tomás Ó Sé admits that Kerry benefitted from unfair rule
You may also like
2 months ago
Dana White reveals who Conor McGregor could fight on UFC return
2 months ago
Your guide to a great weekend of sport and how to stream it all
2 months ago
Conor McGregor says he knows his next UFC opponent and fight date
3 months ago
Commentating cage-side, Daniel Cormier missed the UFC knock-out of the year
3 months ago
Conor McGregor responds to Michael Chandler's callout after UFC 274
3 months ago
'All those guys are overpaid' - Dana White slams boxing salaries
Next Page