"You're looking skinny there, mate. Haha!"

Norman Parke couldn't let Mateusz Gamrot pass by him in the hotel corridor without getting a dig in.

The KSW lightweight champion didn't acknowledge the comment. He didn't even flinch. According to Parke, the lack of reaction was a tell-tale sign that the undefeated Polish fighter knows that what he's up against in Dublin is 'dangerous.' 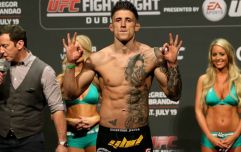 END_OF_DOCUMENT_TOKEN_TO_BE_REPLACED

On Sunday night, Parke will attempt to settle the score with Gamrot after dropping the first fight in the Lion's Den via contentious judges decision. He is fully focused on his adversary and, of course, the spoils of the war - the belt. However, there was another battle on his mind, one that he has had to deal with throughout his entire career.

He is the first Northern Irish fighter to get a win in the UFC. He got there by winning the Ultimate Fighter. He spent four years in the world's biggest MMA promotion and closed that chapter with a winning record. He should be one of the bigger combat sports stars in Ulster, but up North, the media just don't seem to give a fuck.

The northern Irish media all they talk is the negative shit, how about they cover exciting stuff like MIXED MARTIAL ARTS...

Walk around Dublin for a bit and you'll probably see Parke mean-mugging you from a KSW 40 poster on the side of a bus or on a billboard. He's delighted with how his title fight is being pushed down here.

"I wish you could say the same for the people up North, you know? Fuck them."

He believes the media in Northern Ireland are content to ignore mixed martial arts as long as they have their heroic boxers to cover. Although, he's noticed an exception has been made for a certain superstar.

"They don't want to step out of their comfort zone. All they know is boxing. That's it. They'll be all over boxing. When you've got a belt in boxing, they're like, 'Let's use this there. That's good to sell our papers. That's good to put in our media."

"They don't even know mixed martial arts, unless it's Conor McGregor. They just say Conor McGregor's name to get people to watch their TV. They're using him. They don't care, man."

Who covers sport in Northern Ireland anyhow?? Can some tag them on here

The lack of recognition Parke receives in Ulster hasn't been because of a lack of effort. Knowing that getting traditional media outlets to care about a new, niche sport is tricky, he did his best to get their attention. Unfortunately, it was to little avail.

"I kept tagging them on Twitter and the only time they came down to the gym was when Conor McGregor was fighting that time. I just do my thing. I don't need them. I don't need them to put me on their TV. I get a lot of publicity down here."

"They're just stuck in their own wee fuckin' world. That's all they're doing. I don't even care about them. Fuck them. Once I get this belt, they'll be all over you, man. I'll just tell them, go fuck me. But, I'll deal a lot with the Irish because they supported me from the start. They've always been there. English too. The media in England has always been quite good. They've always supported me. Fuck them up there." 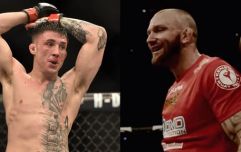 END_OF_DOCUMENT_TOKEN_TO_BE_REPLACED

When Parke came face-to-face with Gamrot inside the Airside Arena at the Cage Ring Championships event in September, they had to be separated. Parke admitted he only touched him to get a reaction, entertain the crowd and promote the fight. However, he had a serious point to make about constantly dealing with being, 'the Ulster guy who's not even Irish.'

These politically-driven views about nationality are something he's had to deal with his whole life. He feels this is a very archaic mindset, but it still rages on.

"If I had a tri-colour up and I represent Ireland, I would be the dog's balls. That's just the way it comes into the sport. Look at Rory McIlroy. He had the Northern Irish flag then he had the tri-colour. Did you see the uproar about that? Then you had Carl Frampton who's obviously an Ulsterman. He wears a Northern Ireland top then a Gaelic top, then they're all like, 'You fuckin' scumbag!' These guys are living in the past, man."

With regard to the Northern Irish media, it's too little too late to hop aboard the Parke bandwagon. If he wins the KSW belt and the Johnny Come Latelys come knocking on his door, he'll show them where to go.

"When you have the belt or are number one, Northern Irish media will be at your door to get interviews. I'll just say, 'Goodbye, mate. Goodbye.' They never came here from the start. The only people who've been there have been the Irish media and English media."

UPDATE: Norman Parke missed weight and will no longer be eligible for the belt.


popular
Man United aren't good enough to accommodate Ronaldo's refusal to work
Luiz Felipe in tears after bizarre red card after full-time whistle
"I won't let that happen!" - Peter O'Mahony riled up by Connacht star
Player manager takes over Naas just days before county senior semi-final
Outrageous scenes as Glentoran 'keeper attacks his own team-mate in moment of madness
Ireland star Will Connors on his rude awakening playing GAA in KIldare
'I was sitting here this week and people were wondering if I was going to retire'
You may also like
3 years ago
Fight-ending illegal eye-poke certainly left its mark on Norman Parke
3 years ago
Norman Parke punched by rival cornerman following controversial No Contest
3 years ago
Norman Parke loses title fight following agonising weight cut
4 years ago
Northern Irish MMA star stumbles upon world's most terrifyingly huge biceps
4 years ago
One of the first wave of UFC 'fighting Irish' set to retire on a very high note
4 years ago
Norman Parke beats Paul Redmond, but it wasn't enough to earn him BAMMA lightweight title
Next Page