Nate Diaz on the greatest UFC idea that never happened

"There's nothing for me there. I already did everything, beat everybody. I feel I'm the king of that division anyways."

Three years after his last fight in the UFC, Nate Diaz is back.

The Stockton native will take on Anthony Pettis in August and it will be in the division he feels much more comfortable in - welterweight. Diaz was recently removed from the lightweight rankings, sparking speculation that he might be officially retiring from the fight game.

END_OF_DOCUMENT_TOKEN_TO_BE_REPLACED

Diaz, in an interview on Ariel Helwani's MMA Show, laughed off such reports and explained that it was because he was pushing all his chips behind a run at the 170lbs division.

The Californian also claimed he had never really been away from the sport, rather the UFC had kept him at arm's length by denying him the fights, and pay-per-view points he felt he deserved.

"The UFC were dissing me, saying I f***ing turned down fights,"

"I was like, 'Dude, what are you talking about?' You're giving this guy [Conor McGregor] the world, and you're putting this guy down. That's why I haven't been fighting. Why would I work for you while you're over here playing me?

"Three years went by and then they start expecting me to start screaming for f***ing Conor as soon as he loses? Nah, dude, I won that last fight. I'll fight Khabib [Nurmagomedov]. Then Khabib is playing like I have to win something to get to him. I'm like, 'What are you talking about, dude? You have to win to get to me. I slapped you.'"

In his own world, at least, Diaz is the rightful lightweight champion because he beat McGregor at UFC 196 and definitely did not lose to him in the UFC 202 rematch [contrary to the judges' scorecards]. McGregor went on to beat Eddie Alvarez to capture the 155lbs belt and Diaz feels that fight was really his to win. 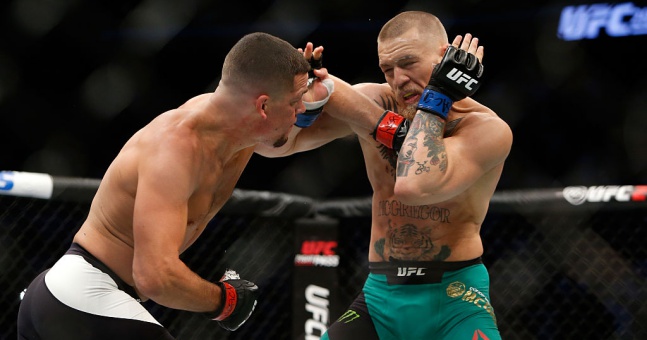 END_OF_DOCUMENT_TOKEN_TO_BE_REPLACED

He is also the rightful champ as Dustin Poirier, the current and interim champion, pulled out of a proposed fight and because he slapped Nurmagomedov at a World Series of Fighting event and, with Kron Gracie, faced down Dagestani and 14 of his entourage.

We'll give it to Diaz, his world view is certainly colourful.

Asked about completing a trilogy with McGregor, Diaz claimed he was 'not interested in it at all'.

"I'm interested in winners. He lost his last fight, and I won my last fight. You think I'm trying to fight someone who just got his ass beat all over the place? I'm a black belt in jiu-jitsu. That s**t wouldn't happen to me."

END_OF_DOCUMENT_TOKEN_TO_BE_REPLACED

For all his talk of being over what would be a much-anticipated fight against 'The Notorious', Diaz was at one time keen on the notion.

During his interview with Helwani, the 34-year-old shed some light on one of the UFC's greatest ever ideas and why it, unfortunately, never came to fruition.

"They wanted me to do a four-man tournament with GSP, Khabib and Conor too.

"But then, right as that stuff falls through, they start down-playing me too. It's f***ing crazy, dude."

The four-man tournament was first brought to the public's attention by Helwani in the summer of 2018. Apparently, the UFC wanted St-Pierre to take on Diaz in Los Angeles on August 4. The winner of that bout would then take on whoever emerged from a September fight, in Las Vegas, between McGregor and Nurmagomedov.

The final, of sorts, would the be back in Vegas at the end of December.

As we now know, McGregor and Nurmagomedov ended up fighting for the UFC title, in Las Vegas, last October while GSP retired and Diaz was left in the wilderness.


popular
"He rode him like a machine rather than a racehorse" - Mullins doesn't spare Townend as second string come good
"Remember that name" - Sonny Bill Williams raves about Ireland U20 star after outrageous try assist
Matt Williams wants two changes and Peter O'Mahony benched for Ireland vs. France
Peter O'Mahony reaction to Liam Williams scuffle shows he may finally be mellowing
Ireland vs Wales: All the big talking points, moments and player ratings
Two changes as familiar faces return to our Ireland team to face France
"The truth is I've never actually worked a day in my life" - Russell bows out on his own terms
You may also like
1 month ago
T.J. Dillashaw: Conor McGregor is right to pull out of USADA testing pool
1 month ago
Ariel Helwani shares Paddy Pimblett WhatsApp messages as spat becomes public
1 month ago
Conor McGregor savagely hits back at Joe Rogan following PED comments
3 months ago
"There’s a new Irish superstar in town" - Young Derry fighter touted for UFC after big title win
3 months ago
Conor McGregor almost unrecognisable after shaving off iconic beard
3 months ago
Dana White confirms Conor McGregor is not in the USADA testing pool
Next Page