Michael Bisping knew straight away that he had made an error in judgement.

Moments after 'The Count' claimed middleweight glory by knocking out Luke Rockhold in the first round of the UFC 199 main event, the pair had to be held apart at the post-fight press conference.

The clash apparently stemmed from Rockhold's refusal to shake Bisping's hand as the presser came to a close and a fiery exchange of words followed in front of a group of reporters.

As Bisping stepped away, he could be heard angrily calling his opponent a "faggot" before immediately recognising his mistake by saying "shit, I shouldn't have said that."

'The Count' was asked about the term, often used as a homophobic slur, during an interview with ESPN and he explained that he didn't mean it in that way but more as a synonym for "wimp."

END_OF_DOCUMENT_TOKEN_TO_BE_REPLACED

"I'm hesitant to make a statement, because it kind of throws fuel on the fire, but the fact of the matter is that's not a word that is generally in my vocabulary," Bisping said.

"Growing up in northern England, that's a word used a lot and it wasn't a homophobic slur. It was more when you refer to somebody as a wimp, that type of thing. That was how we used the word. 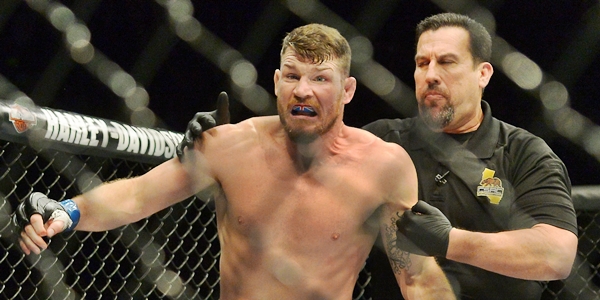 "Now, of course, I'm a grown man and I realise the negative connotations and associations that word has and it's a word I don't use. But Luke and I were in a heated argument and I kind of went back to the memory bank of an insult I used when I was at school and it just came out.

"As soon as I said it, I said, 'Oh shit, what on earth did I say that for?' I'm not homophobic in the slightest. I have lots of gay friends and associates. If I did cause any offence to anybody, I profusely apologise because that's not me."


popular
Kieran McGeeney on the defensive after post-match questions on brawl
Damien Comer targeted in brutal, chaotic Armagh and Galway brawl
Conor Gleeson's gesture to heartbroken Ethan Rafferty a tonic after sideline brawl
Liverpool set £60m Mo Salah price as contract talks continue
Roy Keane makes good on bet after seeing Cork fall to Dublin
Shane McGuigan does a 'Sueey' Cristiano Ronaldo would be proud of after winning MOTM
An exciting, new-look Ireland team that can take it to the Maori All Blacks
You may also like
1 month ago
Conor McGregor says he knows his next UFC opponent and fight date
1 month ago
Commentating cage-side, Daniel Cormier missed the UFC knock-out of the year
1 month ago
Conor McGregor responds to Michael Chandler's callout after UFC 274
1 month ago
'All those guys are overpaid' - Dana White slams boxing salaries
2 months ago
Francis Ngannou wants a Tyson Fury clause in his new UFC contract
2 months ago
Daniel Cormier makes fair point about Dean Barry's UFC debut disqualification
Next Page