Could we be looking at a champion in the making?

Michael Bisping's 15-year-old son may be destined to follow in his father's footsteps.

The eldest boy of the reigning UFC middleweight champion certainly already looks more than capable of handling himself against grown men. 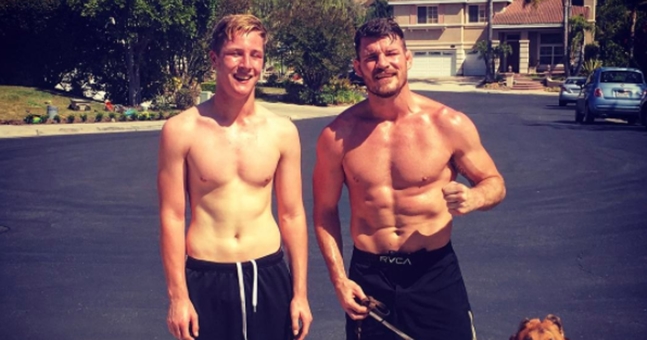 END_OF_DOCUMENT_TOKEN_TO_BE_REPLACED

While 'The Count' entered mixed martial arts with a background in striking, Callum Bisping looks to be a grappler at heart and he's not half-bad at it.

A talented wrestler and Jiu-Jitsu practitioner, Callum was filmed taking it to one of his father's houseguests at the weekend.

A stunning lateral drop opened up the opportunity to attack with an americana and draw the tap with ease.

Later that evening, an ankle pick set up an arm triangle and, again, Callum Bisping came out on top.

END_OF_DOCUMENT_TOKEN_TO_BE_REPLACED

We shouldn't be surprised that Bisping's protege is so accomplished in the grappling realm because you may remember that he claimed a silver medal at the SJJIF World Jiu-Jitsu Championship in Long Beach, California last November.

'The Count' even announced that his son would be providing a lot of assistance as he prepared for his scheduled clash with Georges St-Pierre, which looks off the table at the time of writing. Bisping recently said on his podcast, Believe You Me:

"My son is going to help me with the wrestling side of things along with some of the guys on his wrestling team,"

And while the Bispings seem to be spending more time than ever with one another in the training room, the old man still has a few tricks that sees him get the better of his kid.

Although we don't think that will be the case for much longer.


popular
Peter O'Mahony riled by "petulant s**t" as Munster toasted by Dragons
The clear-cut differences between what Stephen Kenny and Dara O'Shea said, last night
Grim injury news for Seabelo Senatla after Bundee Aki's red card clear-out
Only fans with a wide range of Irish football knowledge will get full marks in this quiz
The largely ignored reason Ireland rely on James McClean and Jeff Hendrick so much
You'll be doing well to get 20/20 in this 2000s Gaelic footballers quiz
Kevin Cassidy believes former teammate should be the next Donegal manager
You may also like
2 weeks ago
Hasbulla signs five year deal with UFC 'worth more than many fighters'
2 weeks ago
Nate Diaz and Tony Ferguson tossed together for UFC 279 main event after wild 24 hours
1 month ago
Your guide to a huge weekend of sport and how to watch it all
2 months ago
Paddy Pimblett leaves O2 Arena in tears after dedicating victory to friend that died by suicide
2 months ago
Conor McGregor 'offered' blockbuster UFC title shot in January
2 months ago
Ian Garry makes American opponent rue pre-fight comments at UFC 276
Next Page