Conor McGregor on his post-fight comments to Donald Cerrone

"It's different with Cerrone. He likes Cerrone."

Conor McGregor says it was an honour to fight 'a legend of the game' in Donald Cerrone at UFC 246.

McGregor needed only 40 seconds to pick Cerrone apart and force a Technical Knock-Out after a typically rapid start. Away from the UFC for 15 months, the Dubliner showed no signs of rust as three shoulder blows, a head-kick, flying knee and a finishing flurry of punches did the job.

In his post-fight interviews, McGregor spoke about this moment (below) when he turned back to speak with Cerrone not long after referee Herb Dean had waved the fight off.

McGregor was asked by BT Sport what words he had exchanged with the American in the aftermath of a whirlwind fight. He replied:

"I was thinking in my head [before the fight] that if he falls in with his shots, which he does and is known for, and if I caught him with a big shot, I was going to actually tell Herb to stop the fight, you know? If I knocked him out, I wouldn't have followed him down. I'm just happy that it finished smoothly enough." 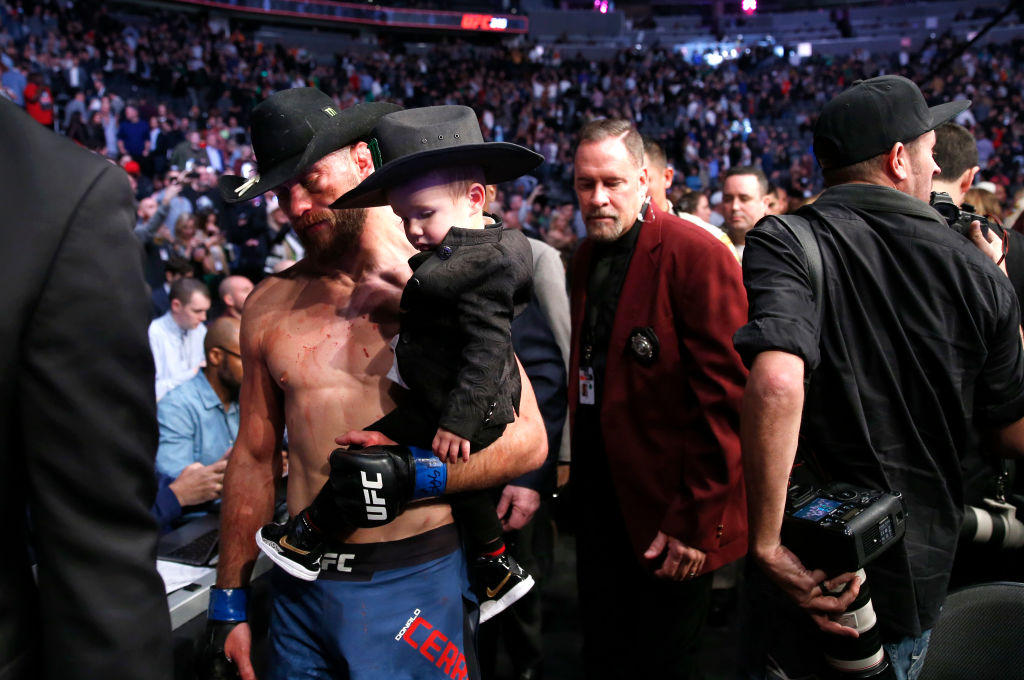 Donald Cerrone leaves the arena with his son Dacson after losing to Conor McGregor at UFC246. (Photo by Steve Marcus/Getty Images)
Advertisement

UFC president Dana White told reporters that everything around this fight was a welcome mood change after the bad blood around McGregor and Khabib Nurmagomedov at UFC 229. White spoke about Cerrone's future after the fight and admitted it would be a tough conversation.

"He lost to No.1, No.3 and No.4," White began, referring to Cerrone's last three fights against Tony Ferguson, Justin Gaethje and McGregor. "I don't know what's next.

"I'll talk to him and see what he wants to do, but we all know the answer to that question. He's like the lighter version of Chuck Lidell. This is what the kid does, it's what he loves to do and it's who he is.

"This is the not so fun part of the job, when you have to have these conversations and see what he wants to do.

"Yeah, yeah, I'd like [for him to take a break]," White added. "When the rankings come out on Tuesday, we'll see where he ranks and that will determine what fights he will fight next."

White stated that 'there are plenty of places you can go and make a lot of money' and still fight, if the appeal of fighting ranked opponents had dimmed somewhat.

Cerrone already stated that, win or lose, White would be getting a call looking for his next UFC opponent on Sunday evening.