Matt Serra reveals why Nick the Tooth was kicked off Dana White: Lookin' for a Fight

Fans of the online show Dana White: Lookin' for a Fight may be wondering what became of one third of the cast and the UFC president's best friend, Nick the Tooth.

After a few episodes with the eccentric vegan, he suddenly disappeared and was replaced by former UFC fighter Din Thomas.

END_OF_DOCUMENT_TOKEN_TO_BE_REPLACED

It's a long story!

"People have been asking me about Nick the Tooth and why he's not on the show anymore," Serra said on Bruce Buffer's podcast, It's Time.

"It's weird with the Tooth because we had such a great chemistry on the show, I know that. He's a little bit of a wacky guy but I think that's what made the show very interesting and every time I'm leaving the episode, I'm liking the guy. I'm thinking we're getting a long great. I'm thinking things are good.

"And then I get a follow-up text. Weird stuff, Bruce!"

What kind of weird stuff, you ask? Well it all stemmed from a Jiu-Jitsu challenge, issued and subsequently lost by Nick the Tooth.

"It wasn't my idea to roll with the Tooth on the show," Serra said. "I don't know if you watch the show but there was an episode where we had a little Jiu-Jitsu match.

END_OF_DOCUMENT_TOKEN_TO_BE_REPLACED

"Let me just back it up a little bit so you can get my point of view of this thing... We shot the pilot and after the pilot, we went back to the HQ of the UFC and we did a thing where you talk to the camera and have your personal camera time.

"You don't see that until the pilot comes out so when I saw the pilot, I see a thing where the Tooth is... making me look [not] good in every single way... 'He's bald, he's never on time and all we have to do is settle the grappling.' And that's what he said in his thing. So I was confused.

"The very next time I saw him, on episode 2, they capture the moment in the hangar where we go on the plane to go to Alaska and I bring it up to him. I go, 'I'm confused, what do you mean that we have to settle the grappling?'.

"I got my black belt in 2000. I'm Renzo Gracie's first American black belt. I'm not going to start bragging about my credentials but I love Jiu-Jitsu and I've been on the mat a while. And he's a purple belt who's only been training a few years. He won the 40-and-over worlds at blue belt."

The Tooth did not enjoy being humbled on camera and that's when things got interesting.

Serra said: "I go home after the episode and I get a long-winded text saying 'I just want you to know that it was a pleasure and it was an honour but I have to let you know that I cannot let that air'."

The Tooth went on to say that it would bring shame on his coaches if he was seen to be tapping out, which didn't sit well with Serra.

Serra continued: "He's all bent out of shape and I didn't see this coming so I give him a call and I go, 'what do you mean you can't let that be shown? You wanted that. What are you thinking?'

"He goes, 'Well I thought it would be a good bit for the show'. I go, 'Well you got your bit but you didn't like the outcome so what now you don't want it to be shown? That's bullshit'."

Then it got weird!

Serra said: "Dana calls me and he goes, 'Hey man, Tooth’s off the fucking show!' I go, 'What? What the hell happened?' He says, 'We almost got into a fist fight at an Agent Orange concert.'

"And this is how it went down. [UFC matchmaker] Joe Silva asks him, 'Hey man, how was it to roll with Matt?' And he was asking him nicely like, 'Oh, how’d that feel?' And that guy, right away, goes 'Oh that fat motherfucker set me up dude!'

"The guy attacked me, this fuck! Not only that, he goes, ‘I want you to admit that you guys really didn’t get tased or else I’m walking off the show'."

What Nick the Tooth was referring to was the fact that he reacted worst in an episode where all three - Nick, Dana and Matt - received a shock.

Serra's story goes on: "Dana’s like, ‘I’m not saying that didn’t happen, it happened! What do you want me to say? We didn't set you up.' 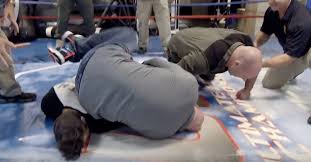 "I think the guy just has a problem with the whole reality TV thing. He did tell me before that he wasn't used to it but we can't be held hostage by some nut who, every time we shoot something, we've got to be worried that he's going to walk off the show.

"So Dana and I were going over some options and, out of nowhere, I thought of my buddy Din Thomas. We have a good chemistry, he's a funny guy. We have some history where we fought and now we're good buddies and it was a controversial decision."

And there you have it... The long and weird story of how Nick the Tooth became Din Thomas.