Marc Goddard doesn't get enough recognition for what he does.

Being an MMA referee is one of the toughest and most unforgiving gigs in the world and Marc Goddard is one of the very best in the business.

MMA is a supremely violent sport. Fighters spend a significant amount of time, sometimes a lifetime, training across multiple combat disciplines in preparation for that walk. Inside the cage, the ultimate goal is victory by damaging your opponent to the point of bodily failure. Whether it's by rendering them unconscious with your fists or shins, choking them to sleep or breaking their bones, the most definitive way to win a fight is by ensuring your adversary can no longer continue.

Amidst all this chaos, the referee has to maintain order. Amidst all this brutality, the referee is partly responsible for their well-being. A tragedy can strike at any point, but there are rules, regulations and protocols in place to ensure that the risk is as low as possible. One mistake in officiating can result in a fighter suffering unnecessary damage that can cause injury, long-term impacts on their health and the reality is, it can also result in death.

That's the kind of pressure an MMA referee faces. Two consenting adults put their lives in their hands. They trust them not to fail. That's something Goddard has consistently avoided - failure.

I operate with integrity, belief and values.

I hold MMA in a deep rooted place in my life and have considered myself most fortunate to have done so for so long.

Family first. Everything else second.

The UFC Singapore headliner between Holly Holm and Bethe Correia perfectly exemplifies how good Goddard can be when his involvement is required.

When a fight is running smoothly, there shouldn't be any need for the referee to intervene and upset the flow. However, this bout was so lacklustre in the early exchanges that the fans started voicing their disapproval. Only 12 strikes landed in the opening round, which wouldn't necessarily have been an issue had the fight not been exclusively a stand-up battle.

Once the second stanza started shaping up exactly the same as the first, Goddard intervened. He briefly brought proceedings to a halt to politely warn the competitors to be more active.

"I respect the gameplan and what you're trying to do,  but we're going to have to make something happen."

In the very next round, the fans got the action they so desperately craved when Holm landed that devastating coup de grace.

Goddard did a lot more than force the action that ultimately led to the finish though. Once that knockout blow landed, instinct kicked in.

That was a terrible way for Correia to get knocked out. Only a few seconds after taunting 'the Preacher's Daughter,' the Brazilian stepped face-first into a thunderous shin. Although Correia was still upright when she fell, it was clear that she was done.

It was obvious to everyone that the fight was over. Everyone, that is, except for Holm. We saw Correia struggling, disorientated and aimlessly holding her hand to the sky in a feeble attempt to defend herself. All Holm could see was the woman standing between her and the embarrassment of four consecutive losses. She had to go for it, and she did.

Fortunately, so did Goddard.

He sprinted over from the other side of the Octagon to end the contest. As one-time UFC title challenger Dan Hardy highlighted, his method of protecting the downed opponent was simply spectacular.

Look at this excellent refereeing by @marcgoddard_uk in the Holm v Correira fight. Blocking that last punch with his lead hand. 👌🏼 pic.twitter.com/SzxMVPYF7u

END_OF_DOCUMENT_TOKEN_TO_BE_REPLACED

It's that kind of grace under fire that makes Goddard one of the most respected refs on planet Earth. He firmly believes in doing things by the book and even it is flawed, the Unified Rules of MMA is the best book we have.

Goddard doesn't take too kindly to defiance of the rules. It doesn't matter how much of a celebrity you are, if you break them, he will call you out on it. After all, that's his job.

We found this out in Gdansk when he officiated Andre Fili's win over Artem Lobov. For the guts of two rounds, Conor McGregor was attempting to coach his SBG teammate from the crowd. McGregor wasn't a licensed cornerman, so he wasn't permitted to shout instructions.

Eventually, Goddard had enough. McGregor was the loudest voice in the arena and it was starting to get out of hand. Midway through the second round, he stopped the action to tell him to cease his hollering.

"Conor, what's got into you, man? Sit down, please. You're a professional!"

Of course, we couldn't talk about Goddard's 2017 without mentioning Bellator Dublin. You already know what happened. McGregor leapt into the cage during Charlie Ward's fight against John Redmond and mayhem ensued.

END_OF_DOCUMENT_TOKEN_TO_BE_REPLACED

Goddard tried to get him to leave, which riled McGregor up into a fury. The UFC star retaliated by sprinting across the ring to shove Goddard into a dazed Redmond on the deck.

There was so much confusion that night. Confusion spread through the 3Arena's press row in the aftermath with unconfirmed rumblings of what actually happened between the famous spectator and the referee. It was only when Goddard sent out that epic statement that his commendable handling of the situation was fully appreciated.

Madness in Dublin thanks to @TheNotoriousMMA!!! DO NOT miss #Bellator187 TONIGHT on @spike 9/8c pic.twitter.com/BGWcOBDvFb

McGregor's apology dropped first. His attempt to denigrate Goddard's performance didn't gather any momentum among those who matter in this conversation. His reading of the situation was simply astounding.

"The referee Marc Gonard (sic) was making a horrendous decision in trying to pick an unconscious fighter up off the floor and force the fight to continue into the second round."

Goddard laid out what really went down in plain English. Once Redmond got knocked down, the crowd noise drowned out the buzzer. Goddard admitted that he stepped in to end the round, but did so one second too soon because he couldn't hear. He had yet to determine whether the fight was over or not by the time McGregor entered the cage.

He confirmed that his talk with McGregor in the cage had nothing to do with any apparent beef. In his own words, McGregor just 'happened to be there' and he needed him to leave. 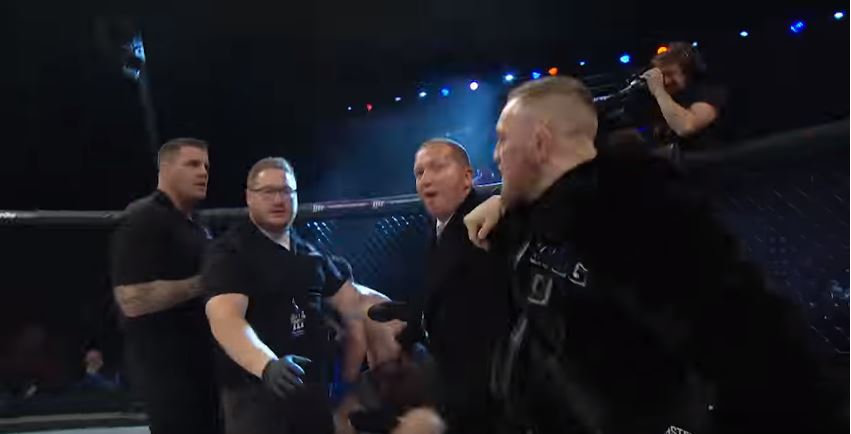 The fact that it was McGregor who Goddard stood up to made it more impressive. Not because it was a display of 'Big Scottish balls' to take action against the biggest superstar in the sport. Although it certainly did. What stood out to us was his mentality. Goddard would have done the exact same thing to anyone who acted the way McGregor did, whether it was a nobody or the pope. That's what he's there for. That's what he's supposed to do.

When it's done badly, you'll hear all about it, but when a referee excels, it receives very little traction. It's time we give Goddard the appreciation he's due and award him 2017's Sports Personality of the Year.

A vote for Goddard is a vote for professionalism.


popular
The SportsJOE 12 o'clock quiz | Day 134
"It's not about winning at underage. It's about building players and building people"
"Me and him used to room together, and he was a bit of a nightmare"
Excitement in Mitchelstown as Cork man set for AFL debut at 20
The SportsJOE 12 o'clock quiz | Day 133
A starting XI of the best free agents available this summer transfer window
PIC: Rugby league star deletes Twitter after scorned girlfriend posts infidelity photo