After a brief peaceful period between Conor McGregor and Khabib Nurmagomedov on social media, 'The Notorious' returned with a scathing comment earlier this week.

Both McGregor and Nurmagomedov were instructed to tone down their Twitter beef after things got out of hand last month but the animosity remains viscerally real.

"I am aware of the recent social media exchange between Khabib Nurmagomedov and Conor McGregor," UFC President Dana White said at the beginning of April. "The ongoing situation has escalated to a level that is unacceptable. As such, we are taking the necessary steps to reach out to both athlete camps and this situation is being addressed by all parties internally."

But McGregor returned to his tweet-deleting ways on Monday when he criticised the UFC's rumoured plans to have Nurmagomedov, Islam Makhachev, Zubaira Tukhugov, Abubakar Nurmagomedov, Mairbek Taisumov and Zelim Imadaev compete at the UFC's third show in Abu Dhabi.

'The Eagle' is expected to fight interim champion Dustin Poirier for the undisputed lightweight championship on September 7 and several of Nurmagomedov's fellow countrymen are set to feature on the undercard. 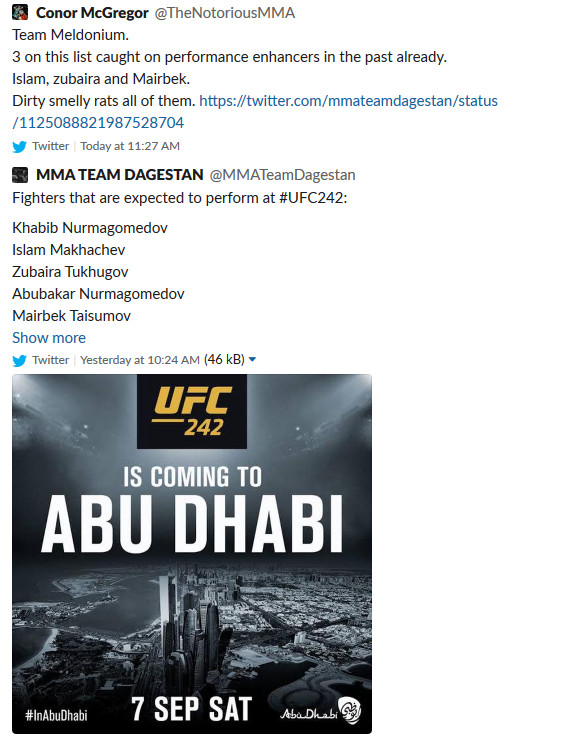 Taisumov made his availability known after serving a suspension from the United States Anti-Doping Agency when he tested positive for a banned substance.

And while McGregor deleted the social media post which branded Taisumov, as well as Makhachev and Tukhugov, "dirty smelly rats", Taisumov has hit back in no uncertain terms with the below tweet.

McCocaine the only SCARY RAT I see on this picture is YOU sitting in the corner whining and crying, calling it all business. Only things you're smashing are smartphones, busses and cocaine lines you junky! Hope to see you one day face2face⏳ #TeamTAISUMOV #McCocaine #UFCAbuDhabi pic.twitter.com/Ocf1y0OCFf

END_OF_DOCUMENT_TOKEN_TO_BE_REPLACED

Taisumov has not competed since last September, when he claimed a unanimous decision over Desmond Green, and the Russian lightweight has only just become free to fight again after serving a six-month ban for testing positive for a banned steroid.

McGregor, meanwhile, has returned to training and is talks for a comeback before 2019 is out.