We came unbearably close to seeing Kurt Angle fight in the UFC.

Angle, who is the current TNA heavyweight champion told the MMAHour's Ariel Helwani: "I've had meetings with them all in MMA, World Series, Elite XC, twice with UFC. Whether it was the money or the timing wasn't right, it didn't happen. I considered going until I turned 42.

"I wouldn't even think about doing it now, unfortunately. I don't regret it." 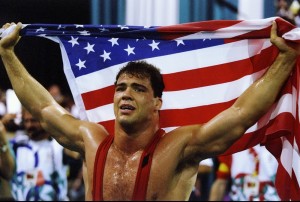 END_OF_DOCUMENT_TOKEN_TO_BE_REPLACED

Dave Meltzer reports that UFC president Dana White first offered a fight to Angle in an attempt to take advantage of a rivalry he had with former Strikeforce fighter Dan Pruder.

"When I did that thing with Dan Puder, I couldn't even do five push-ups, my neck was so bad," Angle said of a wrestling match he had with Puder in 2004.

END_OF_DOCUMENT_TOKEN_TO_BE_REPLACED

"He caught me with an armbar [kimura]. Thank God he pinned himself. It was a wrestling match, not an MMA fight, but the thing is he had me.

"Dana wanted to go with it," he said. "Not that I'd say Daniel Puder would be an easy fight, but I don't think he'd have been a problem, and it was big money. But I'd just signed with TNA three days earlier.

END_OF_DOCUMENT_TOKEN_TO_BE_REPLACED

The second time that White approached Angle, who has a gold medal in wrestling to his name from the 1996 Olympics, was in the hope of signing him to compete on the tenth series of The Ultimate Fighter.

"The second time I met with Dana, I took the physical," Angle said. "He wanted me to do The Ultimate Fighter with Kimbo. He was great.

"He was willing to pay me a good bit of money to be on the show. But he wanted me ready in four-and-a-half weeks. It just wasn't in the cards. I think it would have been great TV.

"He was willing to sign me to a six-fight deal after the show, but he wanted me on the show. But it wasn't going to happen in four-and-a-half weeks." 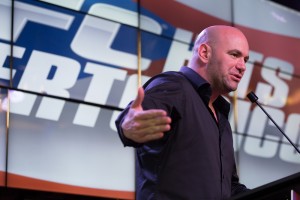 Dana White claims that the reason behind the failure to get Angle on TUF 10 came down to the wrestler failing his pre-tournament medicals.

Oh what could have been.