Before you take issue with the use of the phrase knockout monster, have a look at the following clip.

That was Anthony Johnson before he packed on the 35+ pounds to become one of the most dangerous light heavyweights in the UFC.

END_OF_DOCUMENT_TOKEN_TO_BE_REPLACED

The aptly named "Rumble" fought at welterweight (when he made it), middleweight (kinda) and heavyweight (he made that one alright), so he knows all about the dangers of moving up a weight class. Speaking to Yahoo on Conor McGregor's decision to move up to lightweight to fight for the title, Johnson claimed that the Notorious might not find it as easy at 155 lb.

"Conor is a very big featherweight and he has that advantage over those guys in his division," Johnson said. "I believe he'll understand the difference once he faces a true 155-pounder. They have the strength and speed and power you don't see [at featherweight]. 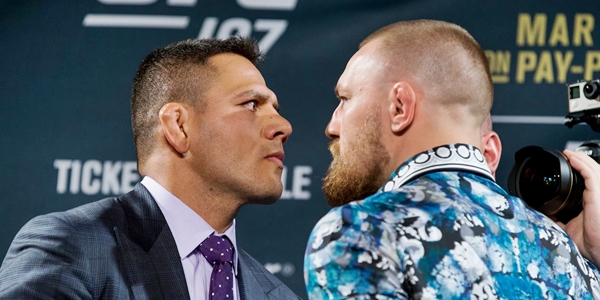 AJ feels the sudden increase in speed and power could overwhelm the Notorious, but he believes McGregor's mental strength may be the x-factor that sees him overcome all the difficulties of the new challenge.

"When it's fight time, I don't want to say he'll have a rude awakening, but he'll have that, 'Oh [crap],' moment where he'll wonder if he made the right decision. He's such a unique guy and such a strong guy mentally that maybe he won't, but my point is that there is a big difference each time you move up."


popular
World Cup 2022 Day 12: All the major action and talking points
From Ireland to Argentina: Alexis Mac Allister's Irish roots explained
The FootballJOE Qatar World Cup 2022 Geography Quiz
France demand FIFA change result of World Cup defeat over 'rule break'
"Nowadays, even if I don't hit a ball, I don't care as long as we win" - Gleeson learning from the past
Cristiano Ronaldo 'agrees £173m-a-year deal' with Saudi club
Castleknock's Warnock the hero as Maynooth win first ever Ryan Cup final
You may also like
1 month ago
Dana White confirms Conor McGregor is not in the USADA testing pool
2 months ago
Hasbulla signs five year deal with UFC 'worth more than many fighters'
2 months ago
UFC fighter Elias Theodorou has died, aged just 34
2 months ago
John Kavanagh and Johnny Walker kicked out of T-Mobile Arena during UFC 279 main card
2 months ago
Conor McGregor took exception to one part of Nate Diaz victory speech
2 months ago
Nate Diaz and Tony Ferguson tossed together for UFC 279 main event after wild 24 hours
Next Page