In all likelihood, three of The Eagle's latest victims will be scrapping over the vacated title.

After all the hatred and bile that came before, during and after UFC 229, the Khabib McGregor book may have finally closed with some decency and respect.

In October 2018, Conor McGregor and Khabib Nurmagomedov met in The Octagon and settled a beef that got so ugly that it ended up sucking in innocent bystanders and threatening multiple careers.

McGregor and Nurmagoedov had a mutual respect of each other and posed for a picture together back in 2014. The pair also engaged over social media and praised each other in press conferences. 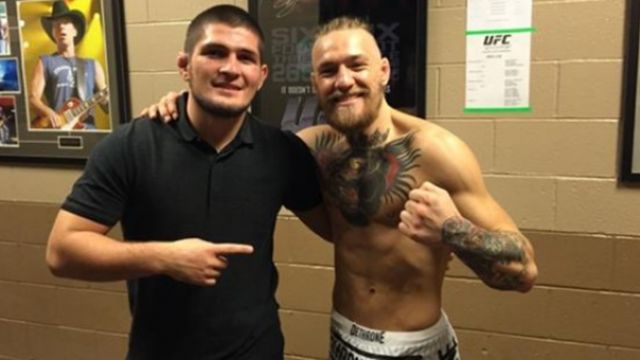 END_OF_DOCUMENT_TOKEN_TO_BE_REPLACED

It was when McGregor, as featherweight champion, stepped into Nurmagomedov's lightweight sphere, in 2016, that the bad blood began simmering. There was a backstage clash, in November 2016, and that was the spark.

The war or words and disparaging comments eventually ramped up to Nurmagomedov and his crew threatening Artem Lobov and McGregor escalating that by attacking a bus carrying the Dagestani and fellow UFC fighters on a bus at the Barclays Center.

END_OF_DOCUMENT_TOKEN_TO_BE_REPLACED

Nurmagomedov looked to have settled it at their UFC 229 title fight but a post-event brawl was a grim affair and ensured that a rematch was top of many agendas... after respective suspensions were served.

While Nurmagomedov defended his belt two more times and McGregor fought Donald Cerrone at 170lbs, there would be no rematch. The champion was due to face Tony Ferguson until the Covid-19 pandemic nixed that jinxed match-up again. Justin Gaethje defeated Ferguson, in April, and became interim champ and No.1 contender.

Then, during the summer, Khabib's father Abdulmanap Nurmagomedov passed away due to Covid-19. The champion kept his vow to his late father and successfully defended his title against Gaethje at UFC 254 only to retire from fighting moments after the bout.

With Daniel Cormier, his American Kickboxing Academy stablemate, confirming Khabib's retirement on the UFC 254 broadcast, the tributes to the 29-0 lightweight maestro flowed in. McGregor was quick to pay his respects:

'Good performance Khabib. I will carry on. Respect and condolences on your father again also. To you and family. Yours sincerely, The McGregors.'

Good performance @TeamKhabib.
I will carry on.
Respect and condolences on your father again also. To you and family.
Yours sincerely, The McGregors.

McGregor is due to fight Dustin Porier in January 2021 and a win could vault him back into the lightweight title picture. The winner of that bout would likely go up against Gaethje, although Michael Chandler (the former Bellator lightweight champion) will have something to say about that.

Tony Ferguson will surely have a say on affairs too. Suddenly the division is in flux again.

One wonders if McGregor may shelve his plans to box Manny Pacquaio next year so he can focus on cementing his UFC lightweight legacy.

You may also like
1 month ago
Dana White confirms Conor McGregor is not in the USADA testing pool
2 months ago
Hasbulla signs five year deal with UFC 'worth more than many fighters'
2 months ago
UFC fighter Elias Theodorou has died, aged just 34
2 months ago
John Kavanagh and Johnny Walker kicked out of T-Mobile Arena during UFC 279 main card
2 months ago
Conor McGregor took exception to one part of Nate Diaz victory speech
2 months ago
Nate Diaz and Tony Ferguson tossed together for UFC 279 main event after wild 24 hours
Next Page