"I'm looking forward, on Tuesday, to seeing me at Number One in the UFC pound-for-pound rankings."

Khabib retires. Who saw that coming?

Looking back, it all makes sense.

END_OF_DOCUMENT_TOKEN_TO_BE_REPLACED

As Justin Gaethje tapped, for the third separate time in 10 seconds, Khabib Nurmagomedov knew he had done it all. He had fulfilled his vow to his late father.

His father and mentor, Abdulmanap Nurmagomedov, passed away from Covid-19 during the summer. For 20 years, he had been in his son's corner as he made his way from MMA hopeful to MMA legend.

Father and son knew that Gaethje was next in line when, in April, 'The Highlight' defeated Tony Ferguson to win the interim lightweight title. Khabib wanted his father to focus on getting better, but they did share some conversations on how they would handle Gaethje.

At UFC 254, on Fight Island in Abu Dhabi, Nurmagomedov did not have his father in his corner, but he had all of his teachings ingrained in his soul. He went out against Gaethje and pressed hard from the first minute on.

END_OF_DOCUMENT_TOKEN_TO_BE_REPLACED

Renowned for his wrestling, 'The Eagle' stood and traded for over four minutes and had the better of the exchanges. When Gaethje landed too many leg kicks for his liking, he shot with the double-leg take-down and ensured the first round was his.

Gaethje kept up with the leg kicks in the second round but the champion had enough and saw a gap as his opponent unloaded with another low blow. Nurmagomedov got Gaethje down and locked in a triangle choke that screamed good night and good luck. The ref was slow to recognise the frantic taps but he got there eventually and Khabib moved to 29-0. 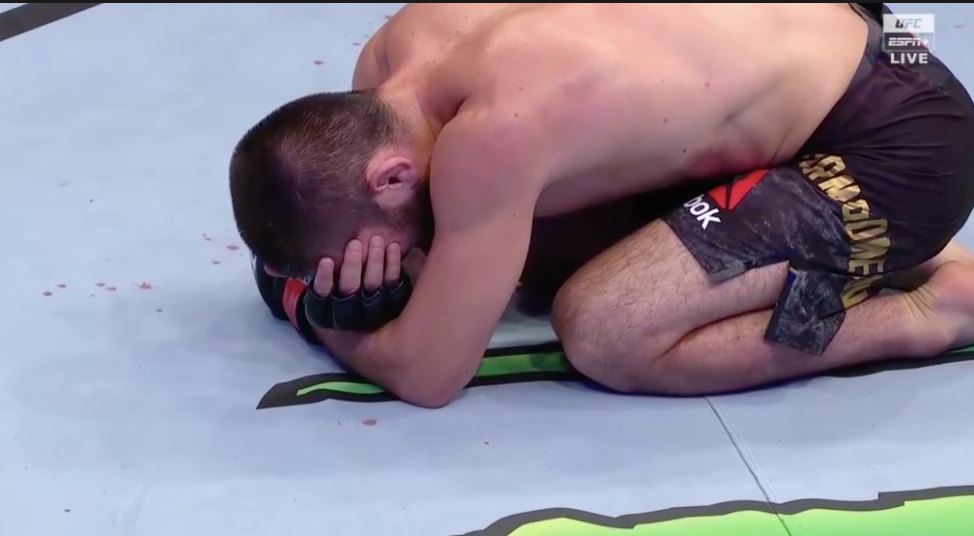 He broke down in the centre of The Octagon, after his win, and wept openly.

END_OF_DOCUMENT_TOKEN_TO_BE_REPLACED

After a few minutes, he rose to his feet and told UFC commentator John Anik that this was his last fight. He revealed that his mother had not wanted him to fight but he had promised her this would be his final bout. He had to honour his father's memory before he could lay down his gloves. He said:

"This is my last fight, there's no way I'm going to be back without my father."

Nurmagomedov said he had proved all he ever had to in the sport, having made Conor McGregor tap out before defending his belt two further times against then-interim champs Dustin Poirier and Justin Gaethje. His one final wish is to sit atop the journalist-decided UFC pound-for-pound rankings.

Following his title fight loss, Gaethje said he had never felt more alive out there. He paid tribute to Nurmagomedov after his personal loss:

"I know he was in a bad spot but he did what he had to do. He took me down and did his thing. He did his father proud."

As if to make the Khabib legacy even greater, UFC president Dana White revealed, after the PPV, that the lightweight champion had broken his foot three weeks before his title defence.