"They want me to do an interview, but I'm good!"

For the second time in less than six months, UFC star Kevin Holland has put his life at risk in stepped up to do one hell of a good deed.

Back in October, Holland chased down and apprehended a car thief, holding on to him until the police arrived and made an arrest. On Monday night, in Houston, Texas, the welterweight [27-1, one non-contest] came to the rescue after an armed gunman opened fire at a sushi restaurant that had over 40 patrons inside.

According to ABC 13, Eyewitness News, at around 11:30pm, Holland ran for the gunman after he fired a single shot into the air at Ra Sushi in Highland Village. Customer Patrick Robinson told the news station:

"We were eating, and the next thing you know, a gunshot just popped off. So everything paused and then everybody started running to get down under a table... You see it on the news, or you see it on TV or the movies and stuff, but you never see it actually in life."

END_OF_DOCUMENT_TOKEN_TO_BE_REPLACED

Robinson and his friend made a dart for the gunman who, it was later discovered, was already sought by the police on a criminal mischief charge. A third patron of the restaurant got to the gunman first and held him, while Robinson and Holland helped hold him down. The panic alarm was pressed, police were alerted to a 'shooting in progress' and they arrived on the scene, soon after. 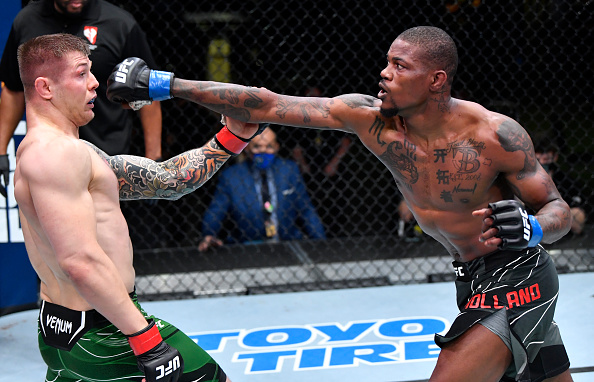 While Holland did not give an interview to ABC, he did share a couple of clips on his Instagram Stories, saying:

"Yo, they was trippin'. They got a shoot-out in this [place]. They want me to do an interview, but I'm good! He [the arrested gunman] is okay. Since we're in Houston, in the great words of Derrick Lewis, he's okay."

The 24-year-old gunman was taken into custody and will now face charges of possessing a stolen gun and discharge of a firearm.

The fact that this isn't the first time he has done something like this is crazy. Kevin Holland is literally Batman. https://t.co/BtkiKJF9rS

Holland fought as recently as UFC 272 on March 5, where he defeated Alex Oliveira on his return to the 170lbs division, after middleweight losses to Derek Brunson and Marvin Vettori in 2021.

In 2020, he tied the UFC record for most victories in a calendar year [five] when he got a KO win over Ronaldo 'Jacare' Souza.