Jorge Masvidal will be in the audience for Conor McGregor's comeback at UFC 246.

At the beginning of 2019, few would have picked out Jorge Masvidal as a Fighter of the Year nominee, let alone winner.

Having not fought since a November 2017 loss to Stephen Thompson, the then 34-year-old made his UFC comeback against Darren Till in March of last year and duly starched the Liverpudlian. Four months later and he needed only five seconds to KO Ben Askren.

END_OF_DOCUMENT_TOKEN_TO_BE_REPLACED

Masvidal was suddenly walking the walk to back up his talk and he was in the crowd when Nate Diaz won his own comeback fight against Anthony Pettis. Standing in The Octagon that August night, Diaz declared himself the 'Baddest Mother******' champion and told the world he was ready and willing to put his new title on the line. The Californian proclaimed:

"With this belt, I want to defend it against… Jorge Masvidal had a good last fight... All respect to the man, but there ain’t no gangsters in this game anymore. There ain’t nobody who does it right but me and him." 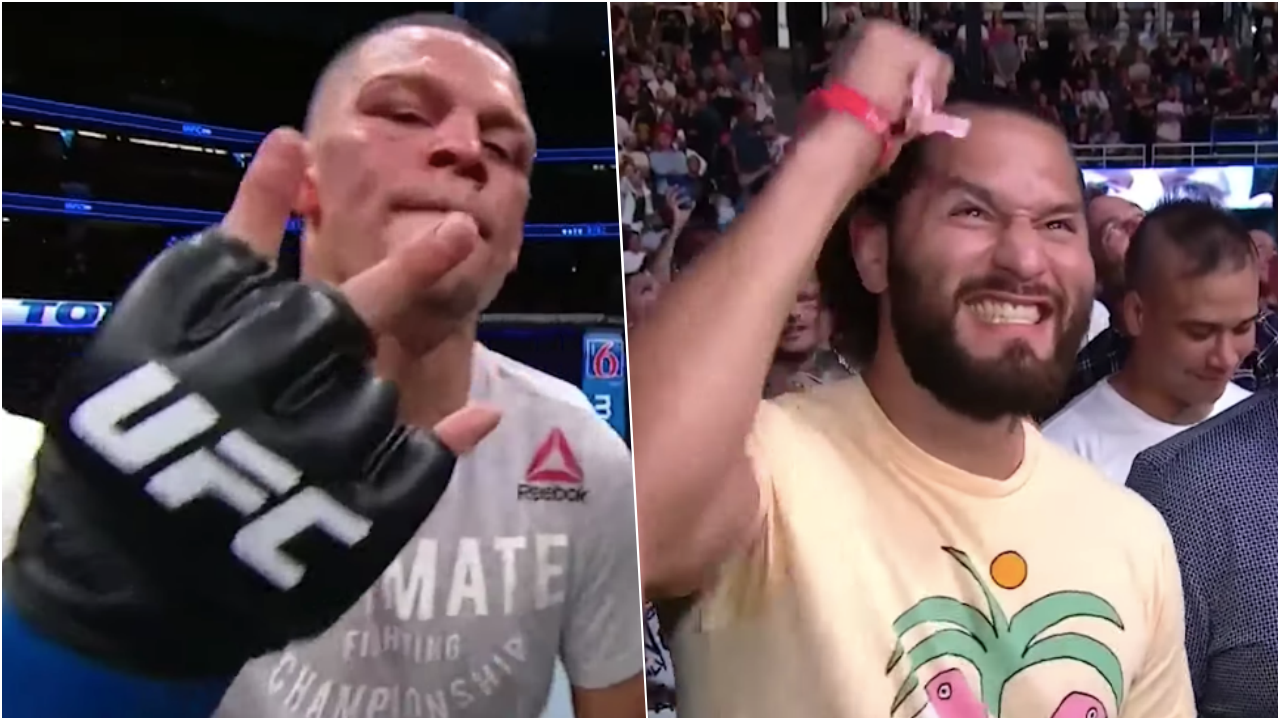 END_OF_DOCUMENT_TOKEN_TO_BE_REPLACED

Masvidal took that specially commissioned belt off Diaz, back in November after a doctor stoppage at the end of the third round, and it was enough to win him various Fighter of the Year accolades. He claimed four awards, including 'Most Improved', 'Best Knockout' and 'Best Male Fighter', during Ariel Helwani's 'Nose Awards' on his ESPN MMA show.

'Gamebred' took time out to speak with Helwani about his impressive 2019 and about how he is gunning for that Fighter of the Year crown for 2020. He has christened reigning UFC welterweight champion Kamaru Usman 'The Owl', after his 'Who?' remarks about Masvidal, but admits he would prefer to fight McGregor before going after the 170 lb strap.

"I'm f***ing ready for everybody. I don't want nobody thinking that because I got all these awards that this mother****** is going soft. I'm coming for everybody's f***ing head in my division, I'm going to get that title."

Masvidal added: "Yes, I would want that [McGregor] fight because it's the big-money fight. It's a two-time division champion, he's got some impressive records and he comes to fight, man. In that aspect, yes.

"Wherever we go, we're going to sell out and there's going to be violence. But if the dude doesn't want to fight, I'm not a bully. Go do your thing. If he doesn't want this, I don't give a f*** then. If you don't wanna fight, don't fight, but don't flirt with me. You want it or you don't. Leave me the f*** alone if you don't."

The McGregor fight 'is not always going to be there', he argues, so both Masvidal and his management would opt for that bout and then look at going after Usman.

END_OF_DOCUMENT_TOKEN_TO_BE_REPLACED

Masvidal clearly heard McGregor's recent interview with The Mac Life, where he spoke about fighting Usman for his welterweight belt, as he stated 'he is the way' in the 170 lb division. "He might have the belt," the Florida native quipped, "but I'm the one calling the f***ing shots."

Masvidal says he is very likely to be in attendance at McGregor's comeback - UFC 246 against Donald Cerrone on January 18 - and he will be closely studying the Dubliner in fighting action.

"There's a 93% chance that I'm there... if McGregor is a future opponent, why not study him in a live format?"

Should McGregor defeat Cerrone on January 18, the post-fight interview with Joe Rogan could tee us all up for a rip-roaring 2020.


popular
World Cup 2022 Day 14: All the major action and talking points
From Ireland to Argentina: Alexis Mac Allister's Irish roots explained
Shay Given on how far Ireland could've gone at the 2002 World Cup with Roy Keane in the team
Ronaldo finally reveals why he got that hideous haircut
The SportsJOE Friday Pub quiz: Week 3
After 18 years, one of the game's greatest stalwarts calls it a day
The story behind Nate Diaz's backstage scuffle with Clay Guida's team during UFC 199
You may also like
2 months ago
Hasbulla signs five year deal with UFC 'worth more than many fighters'
2 months ago
UFC fighter Elias Theodorou has died, aged just 34
2 months ago
John Kavanagh and Johnny Walker kicked out of T-Mobile Arena during UFC 279 main card
2 months ago
Conor McGregor took exception to one part of Nate Diaz victory speech
2 months ago
Nate Diaz and Tony Ferguson tossed together for UFC 279 main event after wild 24 hours
3 months ago
Your guide to a huge weekend of sport and how to watch it all
Next Page