As the chaos unfolded, McGregor's coach rushed into The Octagon to try protect his fighter.

John Kavanagh must have experienced a tumult of emotions after the main event at UFC 229.

Conor McGregor's coach, and mentor, was cage-side as his man endured the toughest fight of his Mixed Martial Arts career. Khabib Nurmagomedov dominated the UFC 229 main event and though he lost a round to 'The Notorious' he was the deserved winner with a fourth-round submission.

Following the fight, Kavanagh was quick to acknowledge the all-round performance of the undisputed lightweight champion. He also mentioned the post-fight bedlam that erupted inside and outside The Octagon.

Another historical night. Amazing atmosphere, technical fight with excitement all the way thru. All that makes MMA a great sport. Shame about the ending. On to the next one.

'Shame about the ending', to our mind, refers to the unfortunate scenes after McGregor had been submitted. Nurmagomedov vaulted the cage to wade into a brawl with Dillon Danis and three members of the Dagestani's entourage threw punches at McGregor.

Amid the madness, Kavanagh thought first of his fighter.

Pictured below (and in the clip) is Kavanagh, coming from the right of the picture, rushing into The Octagon and brushing past a police officer. He gets in between McGregor and his attackers and manages to shove three men away. 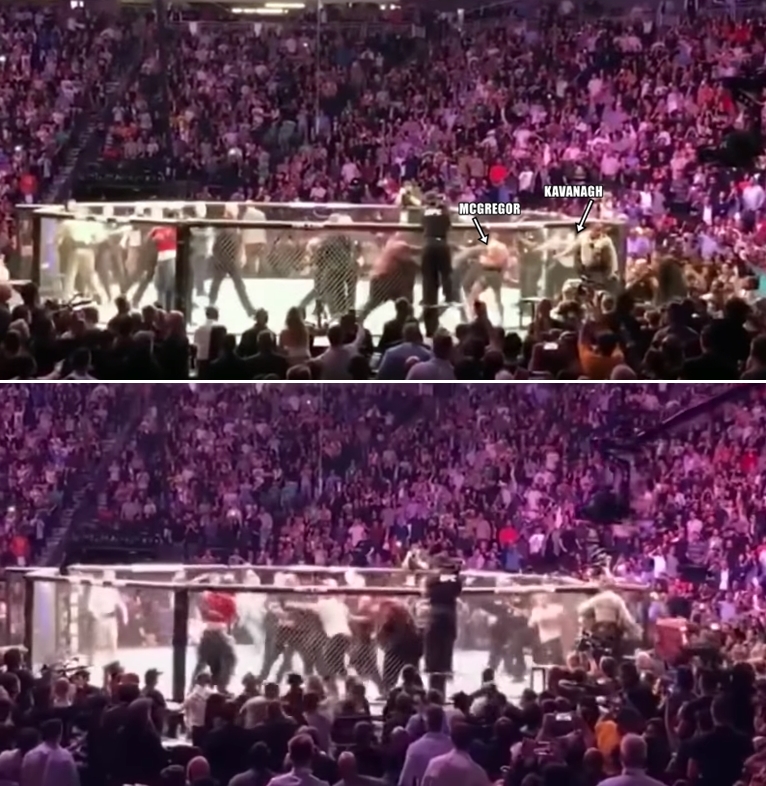 Kavanagh then gets in front of McGregor again as several more security officials pile in and referee Herb Dean appeals for calm.

Artem Lobov also enters The Octagon but most of the action has been and gone in the space of 20 crazy seconds.

There will be ramifications after the unsavoury scenes at the end of the main event.

For Kavanagh and McGregor, another chance to learn on a night they could not get the win.


popular
QUIZ: Which is the correct GAA crest?
Paul Galvin is not one bit impressed with the new Kerry jersey
Andy Moran reveals which former Mayo teammate was the ultimate team player
Ireland Under-17 defender Cathal Heffernan 'in talks' with AC Milan
Kieran Trippier pinpoints Daniel Levy's biggest transfer mistake
Craig Dias on club All-Ireland run, winning Leinster, and making his second debut for Dublin a decade after his first
"I was in the Blackrock end goal looking up to the heavens saying, "Get us through it" - Kerins following his late father's footsteps
You may also like
2 months ago
Ian Garry on the message he received from Dublin GAA star before his UFC win
2 months ago
Conor McGregor posts emotional 5-minute voice message to Ian Garry after UFC debut win
2 months ago
"The Irish are back, baby!" - Ian Garry pays tribute to McGregor after UFC victory
2 months ago
Dublin's Ian Garry scores sensational knock-out win at UFC 268
3 months ago
UFC star Paddy Pimblett "kicked out" for celebrating Liverpool goals in Watford end
3 months ago
José Mourinho swaps Conor McGregor a Roma jersey for some whiskey
Next Page