And he displayed both those skills during his bloody battle with Conor McGregor in the main event of UFC 202.

Diaz, although he came up short in August, is one of the most vocal competitors in the history of MMA and he repeatedly speaks to his opponents when the Octagon doors slam shut.

END_OF_DOCUMENT_TOKEN_TO_BE_REPLACED

Throughout the 25 minutes four months ago, Diaz could be seen laughing whenever McGregor would jog away to catch his breath and there was more than one occasion when the camera picked up the Stockton fighter flashing his middle finger towards the corner of 'The Notorious' when the pair were clinching against the fence.

And McGregor's head coach John Kavanagh has revealed on the MMA Hour that Diaz had a very sweary response to some corner advice directed at McGregor in the fourth round.

Kavanagh said: "There was a funny part in the fight, I don't know if it was picked up or not, but they were in our corner and Conor had thrown a turning side kick which wasn't part of the gameplan at all and I shouted at Conor 'Gameplan! Gameplan! Stick to the gameplan.' 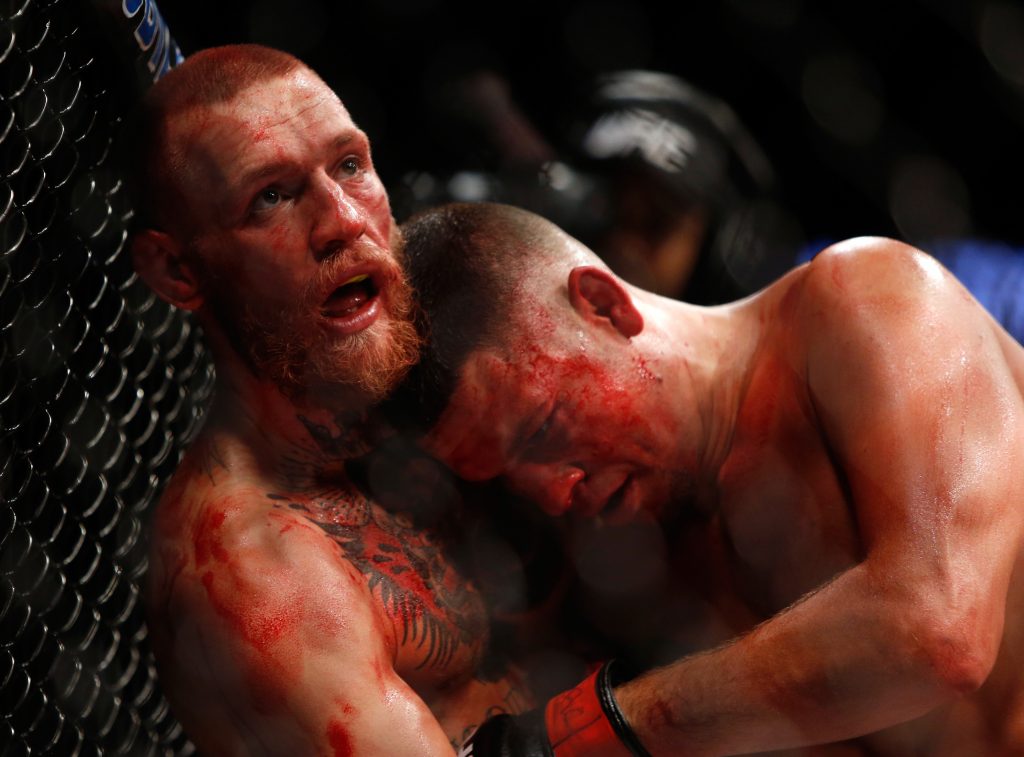 END_OF_DOCUMENT_TOKEN_TO_BE_REPLACED

"And in the midst of all that madness, Nate looks down at me and goes 'F--- you and your gameplan!'

"It was a crazy moment. I'm having a conversation with him and at the same time his eyes are all over the place... That was deep in round four.

"I was looking at him taking these heavy, heavy shots and walking forward and smiling. In my head I'm thinking I'm glad I'm on the outside here because this is insane that Conor has hit him with everything.

END_OF_DOCUMENT_TOKEN_TO_BE_REPLACED

"It's an incredible ability that Nate has and that's why I think it's the toughest fight because at 155 lbs or 145 lbs, anyone else that Conor lands those shots on, which he will, they're all going to go down. Only Nate can take those."


popular
Rory McIlroy explains 'falling out' with Shane Lowry that lasted a few years
World Cup Power Rankings: The top eight pundits of the tournament so far
Talksport presenter puts Martin O'Neill to the pin of his collar over Declan Rice and Jack Grealish
Roy Keane scores winning goal past Micah Richards in ITV v BBC pundits match
World Cup Power Rankings: The top 10 players at the tournament ahead of the quarter-finals
Ariel Helwani shares Paddy Pimblett WhatsApp messages as spat becomes public
Eniola Aluko responds to criticism after on-air mistake on ITV
You may also like
1 month ago
Conor McGregor almost unrecognisable after shaving off iconic beard
1 month ago
Dana White confirms Conor McGregor is not in the USADA testing pool
2 months ago
Hasbulla signs five year deal with UFC 'worth more than many fighters'
2 months ago
UFC fighter Elias Theodorou has died, aged just 34
2 months ago
John Kavanagh and Johnny Walker kicked out of T-Mobile Arena during UFC 279 main card
2 months ago
Conor McGregor took exception to one part of Nate Diaz victory speech
Next Page