"Take that scooter down here, Conor!"

Joe Rogan has often let beaten fighters be after brutal finishes or injuries, but he insists Conor McGregor wanted to talk after his latest defeat to Dustin Poirier.

The veteran UFC commentator was in The Octagon, earlier this month, and waiting to speak with the victorious Poirier. McGregor had fractured his leg at the end of a rough first round and the fight was awarded to 'The Diamond' on a doctor's stoppage.

END_OF_DOCUMENT_TOKEN_TO_BE_REPLACED

It was then, Rogan has claimed on his Joe Rogan Experience podcast, that the Dubliner beckoned him over for a chat.

It did not take long to realise that Rogan should have never taken place. McGregor was sitting there with a snapped leg and his adrenaline levels would have been through the roof. He would have been in shock. Still, McGregor's crass comments on Poirier's wife, Jolie, were far beyond the line and rightfully drew criticism.

As for how 'The Notorious' had seen the first round going, up until that break, he declared:

"I was boxing the bleedin' head off him and kicking the bleedin' leg off him. Usual shite, [he] dived to close the distance. THIS IS NOT OVER! If I have to take this outside with him, it's on outside. I don't give a bollocks."

END_OF_DOCUMENT_TOKEN_TO_BE_REPLACED

The dust has now settled on that fight, and interview, and McGregor sent out a much more sedate video on his social media channels, recorded from a mobility scooter, as he thanked his fans, team and vowed to return stronger.

On the post-fight interview itself, Rogan said:

"People are like, ‘Why did you interview him?’ He actually brought me over.

"He asked me to sit down next to him. I was like, ‘How am I going to do this? I feel like I should just get something out of him.’ 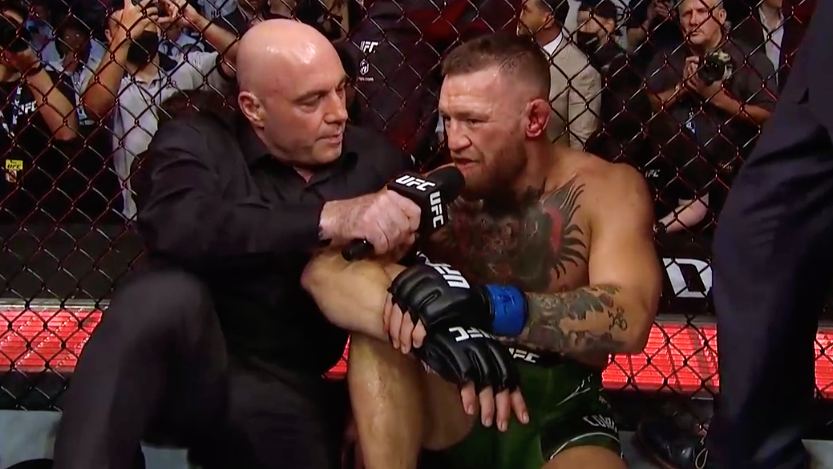 The images of Rogan sitting beside McGregor as his busted leg was being put in a brace will be remembered for many years to come.

While the 33-year-old is rehabbing from his broken leg, Rogan sent out an invite for him to appear on JRE.

"Take that scooter down here, Conor, come on, let’s talk! Let’s do a podcast, Conor."

Rogan already has a gigantic podcast audience. An in-depth sit down with McGregor, over two or three hours, would garner huge interest.


popular
Jurgen Klopp reacted like everyone else to Darwin Nunez headbutt red card
"I cannot believe how Nunez thinks he's going to get away with that!" - Jamie Carragher
Jamie Carragher on the two Man United players Erik ten Hag can't trust
"I went up to the Italians and gave them a big auld shoulder" - Paul O'Donovan does it again
Carragher and Neville brutally name Man United's biggest transfer flops since 2013
Wexford Under-20 lights it up as Ferns win their first ever county title
Wexford, Waterford and Kilkenny down some good men as Australia calls
You may also like
1 month ago
Jorge Masvidal speaks about defending BMF title against Conor McGregor
2 months ago
Dana White reveals who Conor McGregor could fight on UFC return
2 months ago
Your guide to a great weekend of sport and how to stream it all
2 months ago
Conor McGregor says he knows his next UFC opponent and fight date
3 months ago
Commentating cage-side, Daniel Cormier missed the UFC knock-out of the year
3 months ago
Conor McGregor responds to Michael Chandler's callout after UFC 274
Next Page