It's official! Dana White has made moves to turn McGregor vs. Mayweather into a reality

Day by day, Conor McGregor vs. Floyd Mayweather is becoming more of a reality.

What initially seemed to be no more than a hypothetical argument debated among fight fans in bars is now looking like a genuine possibility.

It's an unprecedented move for a mixed martial artist at the peak of his powers to try his hand against not just any boxer, but arguably the greatest of all time, but we wouldn't call it as far-fetched a concept as many had initially written it off as.

The talk gathered steam late last year when 'The Notorious' obtained a boxing licence in the state of California, and we explained how the bout could actually come to fruition. 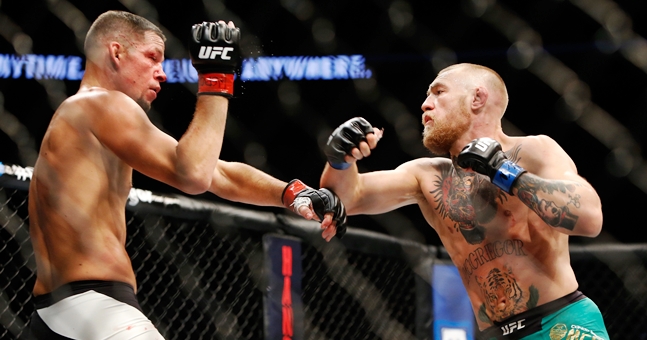 END_OF_DOCUMENT_TOKEN_TO_BE_REPLACED

Mayweather reignited the fire earlier this week when he claimed to have approached McGregor's camp with an offer to fight, revealing that he would be willing to give the Irishman a guaranteed $15 million for the bout, as well as a cut of pay-per-view revenue, which would unquestionably be astronomical.

McGregor, as his tendency, fired himself right back into the driving seat with one of his most personal pieces of trash talk to date and that seemed to be the end of it for the time-being, just another chapter in the story of the biggest combat sports spectacle of all time.

END_OF_DOCUMENT_TOKEN_TO_BE_REPLACED

But UFC president Dana White has intensified the rumours by announcing that he is making a genuine offer to promote the bout.

Speaking to The Herd with Colin Cowherd, White revealed that he would offer both fighters a $25 million purse, as well as a cut of the pay-per-view return in order to get the biggest draws in MMA and boxing to square off with one another.

BREAKING: @danawhite makes a REAL OFFER to @FloydMayweather for a fight vs. Conor McGregor:

$25 million for each and negotiate PPV split

END_OF_DOCUMENT_TOKEN_TO_BE_REPLACED

White's offer is significantly less than the guaranteed $100 million that Mayweather initially wanted to come out of retirement but at least we know that both sides are, at the very least, willing to engage in conversation at this stage.

We wouldn't be at all surprised to see this come to fruition and you shouldn't either.