In the aftermath of Michael Page's Bellator 158 victory over Evangelista 'Cyborg' Santos, all that most people were talking about was the British fighter's Pokemon-themed celebration.

However, after watching the clip, it's impossible not to notice the brutality of the knockout itself, which left Brazilian fighter Santos laid out on the ground from of a flying knee from London-born 'Venom'.

It later emerged that Page connected with such force that it left his opponent with a fractured skull, and Cyborg was admitted to hospital in the early hours of the morning.

BREAKING: Cyborg Santos currently in surgery for a fractured skull. Per @andremgeorgiou #Bellator158

According to the doctors. Cyborg has a depressed fracture from the knee MVP landed. Surgeons currently working on him. #Bellator158 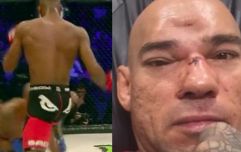 END_OF_DOCUMENT_TOKEN_TO_BE_REPLACED

The second-round defeat left him with a career MMA record of 21-18, with Page extending his unbeaten professional record to 11-0 including seven knockouts. The 38-year-old, who hails from Curitiba, has lost his last two Bellator bouts after entering the promotion with a first-round submission of Brennan Ward back in April.

Santos' ex-wife Cris 'Cyborg' Justino shared a photograph showing the extent of his injuries and urging fans to donate to his recovery costs via a GoFundMe page. 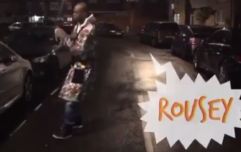 END_OF_DOCUMENT_TOKEN_TO_BE_REPLACED

"I’m under observation now, and will have surgery in the United States," Santos told MMA Fighting's Guilherme Cruz. "I had a serious injury, but Bellator is giving me all the support I need."

Bellator commentator Jimmy Smith, who was cageside for the bout, claims to have spoken to a cut man who told him that he had only ever seen an injury that severe in a car crash.


popular
Iran demand action by FIFA after USA team change flag on social media
World Cup 2022 Day Nine: All the major action and talking points
"I appreciate Moycullen now more than ever" - Cooke's American lifestyle from a Moycullen base
Roy Keane's issue with Argentina star could rival Graeme Souness and Paul Pogba
GAA JOE Team of the weekend
All-Ireland Hurling winner's medal stolen as Gardaí appeal for information
Lionel Messi set to agree deal to join Inter Miami next season, report claims
You may also like
5 years ago
WATCH: British MMA star delivers knockout on his boxing debut
6 years ago
GRAPHIC: After seven-hour surgery, 'Cyborg' Santos shares photographs of his fractured skull
6 years ago
Michael Page describes the moment he landed the skull-fracturing knee on 'Cyborg' Santos
6 years ago
WATCH: British MMA fighter breaks out a Pokeball after Bellator knockout
6 years ago
WATCH: MVP moves to 10-0 with first round submission you're not going to see every day
7 months ago
Francis Ngannou wants a Tyson Fury clause in his new UFC contract
Next Page