Gegard Mousasi claims that Conor McGregor threatened him with a knife

A lot's been said about Conor McGregor but this is very much a fresh accusation.

'The Notorious' has been involved in rivalries and wars of words with fighters from almost every weight class within the UFC since he exploded on to the scene in 2013.

But we'd never heard him mentioned in the same breath as top middleweight contender Gegard Mousasi until Mousasi dropped the Irishman's name in his recent post-fight press conference.

Fresh from his TKO victory over Vitor Belfort at UFC 204 last Saturday night, Mousasi took aim at fighters like McGregor and Floyd Mayweather for winning over fans via expressions of flashiness on Instagram.

And apparently McGregor didn't appreciate the mention as, according to Mousasi, he since contacted the Dutchman with a somewhat worrying threat.

END_OF_DOCUMENT_TOKEN_TO_BE_REPLACED

"People liked it." Mousasi told FloCombat. "I just spoke the truth. Sometimes you have to say stupid shit before people notice you. I got a private message from Conor McGregor. He was cursing at me, the little fuck. He was threatening me. I said 'What are you going to do with your 50 kilos?' The fucker was threatening me with a knife. He knows I could beat his ass any day.

"I said some stuff that I didn't mean," Mousasi added. "I said 'People don't know who the real fighter is or not.' Of course he's a top fighter. English is not my first language and I just blurt stuff out sometimes. I thought it was funny that he was messaging me." 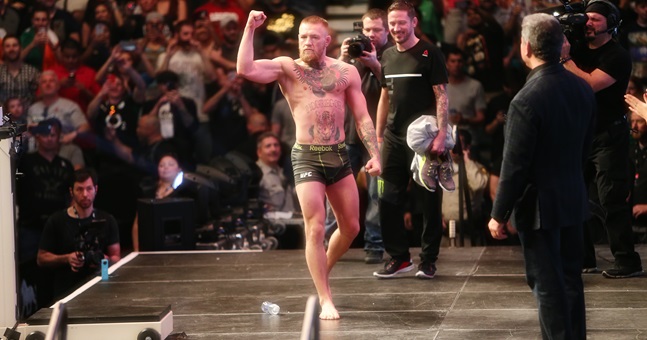 Mousasi has competed in weight divisions as high as heavyweight in his long and storied career so there's no chance that he could cross paths with the UFC featherweight champion in the Octagon.

END_OF_DOCUMENT_TOKEN_TO_BE_REPLACED

'The Dreamcatcher' had his eyes firmly set on a clash with middleweight great Anderson Silva but that's seemingly off the table and now Mousasi wants to avenge his defeat to Uriah Hall last year.

"My manager talked to his (Silva's) management." Mousasi said. "He is not available. He is doing some movie part. He won't be available any time soon. I think they are looking for a title shot or a super fight with GSP (Georges St-Pierre). I don't think Anderson is an option. I think Uriah Hall is an option. I have something to settle with him. I need one more good win after I erase that loss and then a top-four guy and then a title shot is inevitable."