"What are you doing, bro? That's disgusting."

Conor McGregor is so far past the line of what is acceptable that it is a tiny dot on the horizon.

'You need people like me,' posted McGregor, on Instagram, in the aftermath of his UFC 264 loss to Dustin Poirier.

END_OF_DOCUMENT_TOKEN_TO_BE_REPLACED

For the many souls across multiple industries that have surfed the wave of interest generated by 'The Notorious', over the past decade, it would be hard to strongly argue otherwise.

McGregor has always got eyeballs and sparked conversations - he has certainly brought in the money - but his actions from the moment he became a multiple UFC champion until his sixth career loss, on Sunday, have taken a nose-dive in the wrong direction.

There as always an edge to McGregor, but a smile was never far away too. He was often just pushing buttons and seeing what he could get away with.

The Floyd Mayweather Jr. bout, in 2017, took him to another level of fame and he was under even more scrutiny. When he returned to the UFC, in 2018, it was as a WWE heel and Khabib Nurmagomedov was his target. Here he was rambling around like Ric Flair, getting terribly personal and smashing bus windows with hand trolleys.

END_OF_DOCUMENT_TOKEN_TO_BE_REPLACED

Referring to that Barclays Centre incident, months later, McGregor appeared indifferent to the fact that some that were on the bus - including UFC staff and fighters Rose Namajunas and Ray Borg - needed psychological or medical help. To him, it was Nurmagomedov's fault:

"He done f**king nothing. He sat there and took a shit on that bus. He hid and cowered behind women and caused it."

UFC president Dana White would describe that UFC 229 press conference as the "darkest" he had ever been party to. What followed at the fight was pure chaos as Nurmagomedov beat McGregor then jumped the Octagon to start a brawl inside the T-Mobile Arena.

Both men were handed suspensions and McGregor would not fight again until January 2020. His behaviour as a UFC fighter would improve and, ever so briefly, his results would. Losing to Dustin Poirier in January of this year, though, convinced him to go back to the brash ways of old. 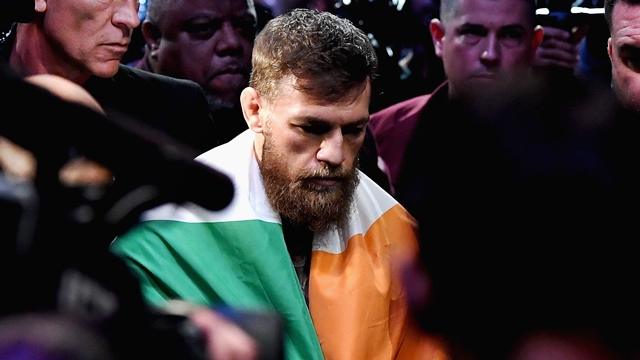 END_OF_DOCUMENT_TOKEN_TO_BE_REPLACED

Poirier had admitted that McGregor had got inside his head, back in 2014, when the pair first met. He claimed he was a more rounded fighter, and man, now that he was a 19-fight veteran in the promotion, but McGregor must have felt it was worth rattling that mental cage again.

Ahead of UFC 264, McGregor told Poirier, through social media, voice notes and through his interviews, that he was coming in to knock his head clear off his body. He was going to through 'murder shots'. Poirier, he declared, was leaving on a stretcher.

All of that is standard pre-fight talk. McGregor went after Jolie Poirier, the Louisiana native's wife, and made tawdry implications and claims. Poirier said he would settle it in The Octagon.

That he most definitely did. After a bright start from McGregor, Poirier dominated the first round. All three judges scored that round in his favour and two had him winning 10-8.

McGregor, as we now know, could not finish the fight after snapping his lower tibia [shin]. Graceful in defeat to Poirier, in January, this time it was ugly. McGregor claimed he was winning the fight when it ended and went after Jolie Poirier again, calling her 'a little ho', and more.

Poirier, who will next fight for UFC lightweight gold, was aghast at McGregor's actions and comments even after he had lost. He commented:

"I can take the trash-talk. There's no-holds-barred with that. But murder is something you don't clown around with. There's no coming back from that. This guy was saying he's going to murder me, and all kind of stuff. He was telling me I'm going to leave here in a coffin. You don't talk to people like that."

New cage-side footage shows the grim moment that Poirier was referring to, and what upset him so much.

McGregor can be seen telling Poirier 'you're getting it in your sleep' and 'you're dead'. That threat was inclusive of Jolie Poirier.

NEW alternate angle of Conor McGregor threatening to kill Dustin and Jolie Poirier “in their sleep” and makes gun sign to his head:

The Dubliner went for surgery on his injured leg, on Sunday, and provided an update to his followers on his plans to return, and on the fight itself. As many MMA pundits had predicted, he was in denial about how he had fared:

"It was a hell of a first round. It would’ve been nice to get into the second round and then see what’s what, but it is what it is, that’s the nature of the business. A clean break of the tibia, and it was not to be.

"Dustin, you can celebrate that illegitimate win but you did nothing in there. That second round would've shown all. Onwards and upwards we go team. We dust ourselves off, we build ourselves back and we come back better than ever."

Once again, though, he was apologising to absolutely nobody.

You need people like me. Some will stay with McGregor until the ride is over. Others are finding that they are doing fine without him.


popular
Mario Balotelli, Luis Suarez, Fernando Torres and why Rio Ferdinand "hated them"
"I don’t trust you" - Joey Barton delivers brutal dismissal of Irish defender
"I remember just hugging this Irish guy" - How one Kiwi rugby star reacted to Ireland's historic series win
Down county football is in tatters, but Conor Laverty is the man to piece it back together
"I'll ask for everyone that comes to the game to wear purple and roots for us" - Pat Fitzgerald
Javier Hernandez offers to play for Manchester United for free
Gatecrashed interviews and chip-shop previews - Wexford GAA's online coverage sets the standard
You may also like
1 month ago
Jorge Masvidal speaks about defending BMF title against Conor McGregor
2 months ago
Dana White reveals who Conor McGregor could fight on UFC return
2 months ago
Your guide to a great weekend of sport and how to stream it all
2 months ago
Conor McGregor says he knows his next UFC opponent and fight date
3 months ago
Commentating cage-side, Daniel Cormier missed the UFC knock-out of the year
3 months ago
Conor McGregor responds to Michael Chandler's callout after UFC 274
Next Page