The Diamond finally got revenge over McGregor

Dustin Poirier sensationally stopped Conor McGregor in the second round of their hotly-anticipated rematch at UFC 257. The two men first met in 2014, when McGregor got the better of the Louisiana man inside two rounds.

On Sunday morning, in Abu Dhabi, Poirier brutally dispatched with the Dubliner.

END_OF_DOCUMENT_TOKEN_TO_BE_REPLACED

With a couple of minutes to go in the second round, McGregor's leg had already taken a pummelling from Poirier's devastating kicking and he could hardly move.

The Diamond then spotted a gap and pounced - unleashing a series of devastating punches that left his opponent reeling. A vicious cross dropped McGregor to the mat, against the fence, and Poirier followed up with another crunching strike before referee Herb Dean stopped the fight.

Victory over McGregor puts Poirier in pole position for a shot at the UFC lightweight title. He previously held the belt until he went down to Khabib Nurmagomedov in 2019.

However, after the fight was over, Poirier wasn't interested in discussing his next clash.

He also brushed off discussions of potential bouts against Khabib or Michael Chandler - if the reigning lightweight champion doesn't return to the octagon.

He instead chose to dedicate the moment to his wife, Jolie - who rushed to his side the moment victory was confirmed.

"I'm not trying to impress Khabib!"

"That's my girl, she's stuck it out with me, this win is a much hers as it is mine."@DustinPoirier isn't worried about what's next, he's just happy with what life has given him right now.

Always honesty from The Diamond 💎 pic.twitter.com/Xs09buVvto

You could see Poirier's face light up the moment BT Sport's Adam Catterall mentioned his wife's name. The 32-year-old spoke emotionally about the journey the two have been on, having been together since teenagers.

"I didn't have a car, she'd drive me to shows. We'd use her car, she'd stay in the broken down hotels and motels with me." 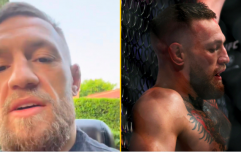 END_OF_DOCUMENT_TOKEN_TO_BE_REPLACED

Poirier then had to fight off tears.

"I don't want to get emotional, but that's my girl, man. She's stuck it out with me. This win is as much hers as it is mine."

The comments prompted fans on social media to label Poirier a "perfect role model" and "the nicest guy in MMA".

Gutted Conor lost, but he lost to an absolute gent. Nicest bloke in MMA. Hope he goes on to win the title.

Man, this guy is so cool. The perfect example of a role model

Keen to distance himself from further fight chat, Poirier said he was first looking forward to returning home, and then going on holiday with his family.

"I'm just excited to get back to Louisiana, I have so much going on right now. I'm building a new house.

"We're going on a snow trip in a couple of weeks. My daughter's never seen snow, but she loves the movie Frozen - so we're gonna be singing and building snowmen."