Dillon Danis took 117 seconds to win on his Bellator debut, back in April 2018.

14 months later and Danis was finally back at it.

Harshly suspended seven months for fighting back, at UFC 229, after Khabib Nurmagomedov plunged off an Octagon and towards him, the 25-year-old made up for some lost time.

Danis called out Bellator weltwerweight champion Rory MacDonald and UFC light heavyweight champion Jon Jones after he defeated veteran Max Humphrey in the first round to move to 2-0 in his professional fight career. 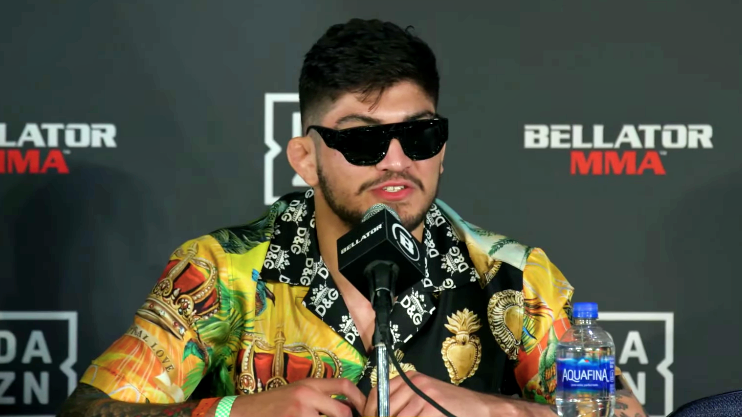 END_OF_DOCUMENT_TOKEN_TO_BE_REPLACED

After declaring himself to be the world's best MMA fighter, in the press conference, the New Jersey native spoke with ESPN's Ariel Helwani about the fight and the woeful knee injury that befell him just a week beforehand.

Danis bemoaned his lack of fluidity and set-ups for take-downs but did enjoy the ground-and-pound element of the fight. He explained:

"[Last] Friday, I tore my LCL [lateral collateral ligament] completely. I couldn't walk, I couldn't stand. It was terrible. Man, I didn't know if I could do it, I swear... but I did it and I took it as a life experience and pulled it off. It makes it all the sweeter."

"95% of fighters would have pulled out of this fight," Danis added. "I just kept telling myself, 'You're different'. You are going to be the best."

Danis trains closely with Conor McGregor, his Straight Blast Gym stablemate, and says 'The Notorious' was a great source of support and advice heading into his fight.

"We talked about it a lot and Conor said, 'You know what man, you can do it'.

"We obviously talked back and forth. He was asking how was this and that. He's always there for me with advice. He's been through it all. The mental side and the physical side. He's a great mentor for me."

Danis told Helwani that he could not walk much before and after the fight, yet declared he would fight again next weekend if there was a good fight on the go.

Rocking the D&G too. McGregor would be proud.


popular
Rob Kearney taught a classic GAA lesson when he tried to have the craic in second game back
Shane Lowry had no problem setting reporters straight at Ryder Cup briefing
The scenes in Newbridge as the biggest hit and hope ever knocks Moorefield out
How one text message a teammate sent Kieran McGeary proves that Tyrone's success was a team effort
Conor McGregor nearly hits Chicago Cubs fan with wild first pitch at Wrigley Field
When Liam Brady lit into Brian Clough for his dismissive Mick McCarthy comments
Kieran McGeary on his relationship with Mickey Harte and his role in Tyrone's success this year
You may also like
2 months ago
UFC appears to have signed a new Irish fighter
2 months ago
Conor McGregor labelled an 'easy payday' who can't compete with top UFC fighters anymore
2 months ago
Khabib says McGregor is "finished" as Dos Anjos makes his play
2 months ago
Shocking post-fight footage shows McGregor threat that upset Poirier so much
2 months ago
Conor McGregor posts first Instagram since last night's defeat
2 months ago
"I'm nice, now I'm mean, I started nice, now I'm back to mean" - Dominick Cruz slams McGregor's changing personas
Next Page