You've got to hand it to Dillon Danis. He backs himself to the hilt.

The New Jersey native is now 2-0 in professional Mixed Martial Arts after an impressive submission win at Bellator 222.

With the Toronto Raptors now the NBA champions, The Drake Curse is well and truly busted...

Danis won his Bellator debut in less than two minutes but had not fought for the promotion in a year. He had kept up his Brazilia Jiu-Jitsu but was apparently sidelined for his role in the UFC 229 fracas, when he traded blows with Khabib Nurmagomedov having being subjected to a wild attack from the Dagestani.

END_OF_DOCUMENT_TOKEN_TO_BE_REPLACED

Nurmagomedov, who beat Danis' Straight Blast Gym teammate Conor McGregor at UFC 229, is coming back in September but Danis, who was suspended seven months for his role in the brawl, beat him to it.

Max Humphrey was his opponent at Bellator 222 and while he lasted longer than Kyle Walker, he was no match for Danis.

Humphrey, a veteran of the MMA game, was taken down less than a minute and absorbed some shots and submission attempts before, after 4:22, eventually tapping out to an armbar.

After getting his hand raised, Danis said, "The last one too quick. This one, I wanted to beat someone’s ass a little bit. I was there to let the hands on him. I just wanted to feel it. You don’t get arrested out there so I was like, 'Let’s go, let’s f***ing do it'." 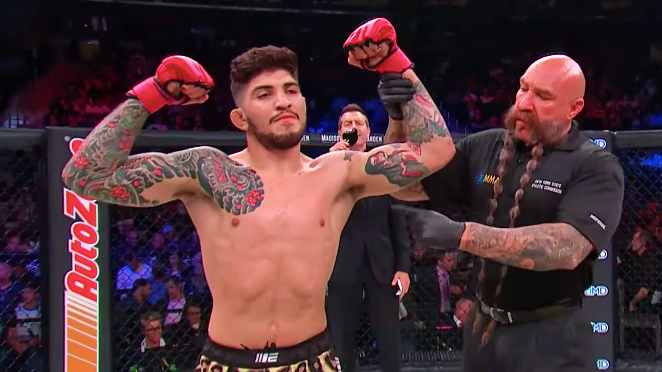 With typical Danis swagger, the 25-year-old then aimed high with his post-fight call-outs:

"I said this before, I’m the f***ing best in the world. I said that already and I say it again.

That is Bellator welterweight champion Rory MacDonald and UFC light heavyweight champion (and current pound-for-pound No.1) Jon Jones on the hit-list.

MacDonald defended his 170lbs belt in the night's main event - getting a unanimous points win over Neiman Gracie - while Chael Sonnen retired from the fight game (again) after losing to Lyoto Machida.


popular
The four stone-cold certainties for All-Stars even as early as this
Eamon McGee just couldn't help himself with Armagh-melee tweet
Kylian Mbappe reportedly wants PSG to sell Neymar
Gavin Coombes one of four Irish players to push themselves into Test picture
"He's actually smiling putting the ball over the bar. He should nearly be fainting." - Ryall on Limerick's legacy
Frenkie de Jong 'determined to stay' at Barcelona, despite Man United agreement
"The economy was one of the big reasons" - Cadogan's move from an electrician to personal training
You may also like
2 years ago
James Haskell responds to MMA call-outs by Neil Best and Andy Powell
2 years ago
James Gallagher set to headline Bellator show in Dublin
3 years ago
'I really think that me and Ben Askren are gonna fight' - Dillon Danis
3 years ago
'Bellator has a Dublin show in September so I'm thinking of bothering them about it' - Heather Hardy
3 years ago
'Katie's an Olympic gold medallist who unified the belts but is not getting paid like a man'
3 years ago
Conor McGregor proved Dillon Danis' inspiration after awful knee injury
Next Page