Darrion Caldwell doesn't think of himself as a wrestler or a fighter. When he looks in the mirror, he sees only one thing staring back at him - a winner.

Backflips gone wrong has been a running theme in Darrion Caldwell's athletic career.

In the closing seconds of his 2009 NCAA championship match against Brent Metcalf, Caldwell tried to showboat with a handspring and a backflip. Just after the whistle blew, Metcalf pushed Caldwell while he was airborne causing him to fall hard on the ground. Metcalf later apologised for the shove.

END_OF_DOCUMENT_TOKEN_TO_BE_REPLACED

After defeating Shawn Bunch in his eighth pro fight at Bellator 143, Caldwell attempted another celebratory backflip. This time he was the one offering his apologies. He failed to stick the landing of his acrobatics off the cage and came down on a camerawoman.

So, it seems only fitting that his mixed martial arts career was borne out of another dodgy backflip.

When Darrion Caldwell backflipped off the cage onto a camera operator (#Bellator195): pic.twitter.com/u4cFnmWAix

Caldwell wasn't just a talented amateur wrestler, he was phenomenal. The two-time NCAA All-American set his sights on the Olympics, but a freak rollerskating injury ended any hope of that ever happening. When he failed to make the USA team for London 2012, he turned his attention to MMA. Five years after debuting in the sport, he became the Bellator bantamweight champion.

"I bust my shoulder up, I had shoulder surgery. It kind of steered me away from the wrestling world, but it was a blessing in disguise, to be honest because had I not put those rollerskates on at 12:30am at some random high school going down some hill then I'd probably still be wrestling. God has a plan for me and it wasn't wrestling."

He wasn't exactly a keen rollerskater. He didn't grow up practicing it as an extreme sport. In his own words, he was simply an adrenaline junkie doing 'crazy shit'. It was just that one time when he went a little too far.

"I was going down a hill and I did a backflip over one car and in the process of doing a backflip, I did a front flip, landed both of them. I bounced up over one car, landed it, did a front flip, landed that, continued to go down hill and just said, 'Fuck it, I'm tired. I'm going to just lie down.' So I pretty much laid down rollerskating in the middle of the street going down hill and it wasn't fun." 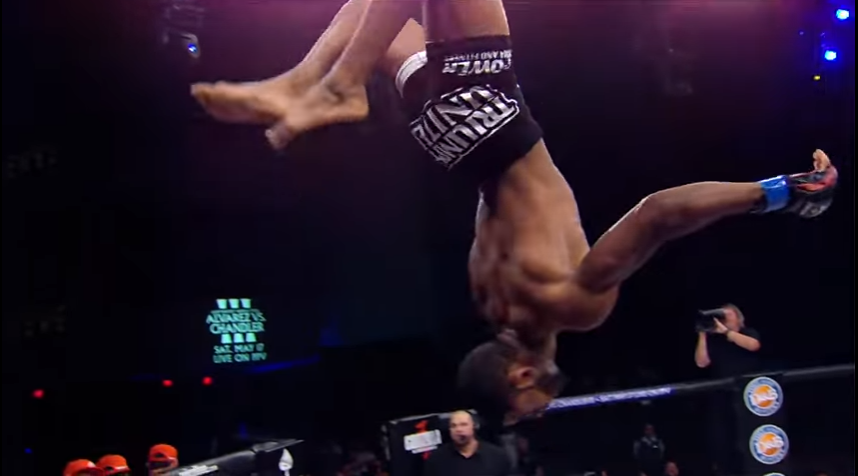 Now, Caldwell gets his kicks from, well, kicks! And punches and elbows and takedowns and submissions. When that cage door slams shut, he feels an adrenaline rush that's unlike anything he had ever experienced before. What makes this hit so unique is that the high doesn't lessen with time. He feels the same buzz every time he makes that walk.

END_OF_DOCUMENT_TOKEN_TO_BE_REPLACED

That being said, Caldwell has found going from competing twice an hour in wrestling to having two fights a year in MMA frustrating. That is perhaps why he is trying to double his workload.

At Bellator 204, Caldwell will do something he hasn't done in nearly four years. 'The Wolf' returns to the featherweight division for the first time since 2014 for a non-title fight against UFC veteran Noad Lahat. His reason for moving back up is simple. He wants to be a two-division champion.

As for the man currently in possession of the 145 lb strap, Patricio 'Pitbull' Freire, Caldwell doesn't see him stopping him from achieving his goal. 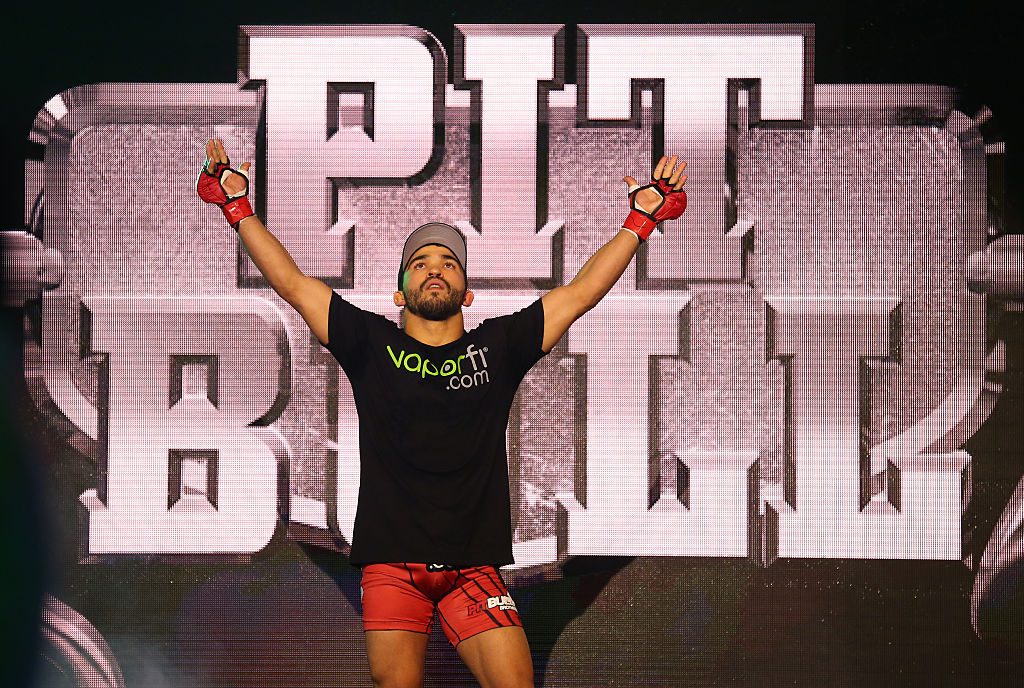 Raining on the parade

Another man competing in Sioux Falls on August 17 who has aspirations of being a double champion is James Gallagher. The SBG star has actually done the reverse of Caldwell for this card in that he is dropping down from featherweight to bantamweight. 'The Strabanimal' claims he's been promised a crack at Caldwell's belt if he beats Ricky Bandejos.

Caldwell doesn't believe that scenario is very likely. He's backing the 10-1 promotional newcomer to give Gallagher the first entry in his loss column.

"I don't think Gallagher's going to win this fight. That's the problem. I don't know if he told you or not, but the guy that he's fighting is from Jersey and I'm a Jersey boy myself. You're not really winning with all that chit-chat and shit. You think you're going to come out here and just talk your way into a world championship? That's not the case. You've got to be looking at what's in front of you." 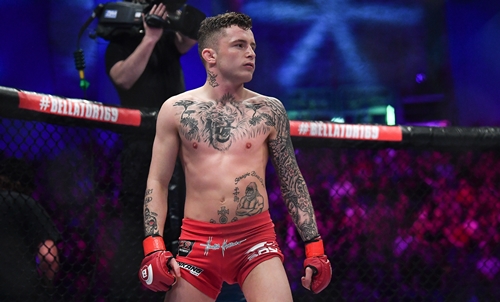 Although Gallagher has urged Caldwell to return to 135 lb to defend the title, the champion isn't buying the plea. He doesn't see him as a confident contender. He sees him as someone who is trying to avoid the really tough challenges out of fear.

"He carries himself as if he's done something spectacular. I don't know what he's done over there. I don't know if he's like a national champ and he's been defending on every level his whole life. But as far as I see, I think he's frightened." 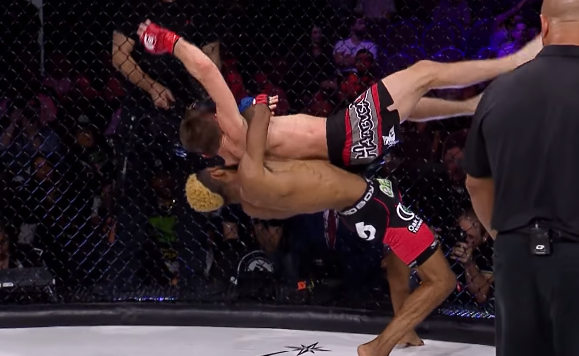 Should Caldwell be successful in his venture and sit on the featherweight throne, he doesn't plan on shirking his responsibilities in the bantamweight kingdom. He's already defended the belt once and he has promised that if Gallagher wants it, he's going to have to take it from him.

The bad news is, if Caldwell has his way, that fight wouldn't take place on home turf for Gallagher. Although he's never been to Ireland before, he gets the feeling he doesn't have much to gain from fighting there.

"Ireland is not for people like me. Going to Ireland, for what? Personally, if I'm being realistic, unless I've got 50,000 followers over there that legit want to see me. If not, then I've got no business going over there and putting on a show for you guys. For what? So you guys can talk shit some more? No, I don't feel it. Get 50,000 followers from Ireland to follow me, I'll fight over there."

This could be the beginning of a beautiful rivalry.


popular
"It's giving the Kerry team a bad image. They don't look like footballers, they look like gurriers." - Liveline has peaked
Bundee Aki overheard in the stands after Faf de Klerk hit on Conor Murray
Eoin Murphy's calls from the goals show Cork they're in for a completely different ball-game
Gatland on his decision to start Bundee Aki, and drop Tadhg Beirne
The SportsJOE 12 o'clock quiz | Day 377
"That's one of the best races I've ever had" - Coscoran kicks like a demon to seize the day
What a waste of bloody talent
You may also like
2 years ago
James Gallagher set to headline Bellator show in Dublin
2 years ago
'I really think that me and Ben Askren are gonna fight' - Dillon Danis
2 years ago
'Bellator has a Dublin show in September so I'm thinking of bothering them about it' - Heather Hardy
2 years ago
'Katie's an Olympic gold medallist who unified the belts but is not getting paid like a man'
2 years ago
Conor McGregor proved Dillon Danis' inspiration after awful knee injury
2 years ago
Dillon Danis calls out Jon Jones after impressive Bellator victory
Next Page