Stipe Miocic and Daniel Cormier engaged in a dick-measuring contest of sorts on the Ultimate Fighter.

If you're going to prank Daniel Cormier, be prepared for the inevitable payback. On this week's episode of the Ultimate Fighter, Stipe Miocic learned this lesson the har...eh, difficult way.

Anyone who used to watch the show (are people really still watching it?) will know that pranks between coaches are a proud tradition. Miocic had a good one lined up for the second episode. In the opposing team's dressing room, he covered every single photo of Cormier with a photo of himself rocking a creepy moustache.

END_OF_DOCUMENT_TOKEN_TO_BE_REPLACED

As for the large photo that is the focus of the room, he replaced that with a picture of himself and coach Gian Villante posing pantsless. It got a good laugh off the Cormier's team, but the light heavyweight champion was never going to let them get away with it. 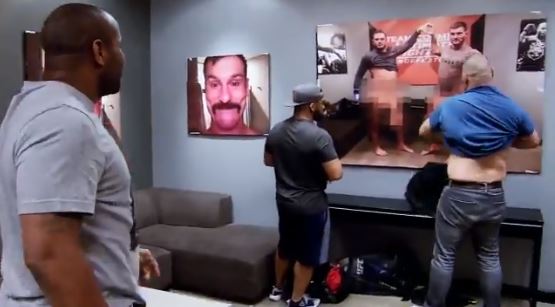 DC brought the phrase 'fight fire with fire' to a whole new level with his response. Rather than go through all the trouble of taking photos, getting them printed and hanging them up, he went back to basics. He marched over to Miocic and Villante in the dressing room.

"Hey Gian, that picture does sum you up, you know?"

At this point, he unzipped his pants and walked towards the two men. His comment of "This is how a dick's supposed to look!" caused Villante to keel over in animated laughter.

Check out the prank war in the video embedded below. This went out on BT Sport, so don't worry, it's safeish for work. Maybe just wear headphones to be safe.

One does not simply out prank Daniel Cormier 😂 pic.twitter.com/RvvrxYQFEx