In 2016, Alex Oliveira got caught in Donald Cerrone's triangle in the first round of their UFC Pittsburgh headliner. It took a good few taps from the Brazilian Cowboy before Yamasaki finally decided to step in and put him out of his misery.

Cerrone actually had to inform the referee that he was submitting.

This did not please White.

END_OF_DOCUMENT_TOKEN_TO_BE_REPLACED

That wasn't the only time Yamasaki received backlash for calls he made inside the Octagon.

Usually, the criticism is over letting contests go on for too long. He took his sweet time stepping in when Matthew Lopez was hammering Johnny Eduardo with ground-and-pound at UFC 212.

Then, of course, there's the infamous 'no look' screenshot that will haunt him for the rest of his life. 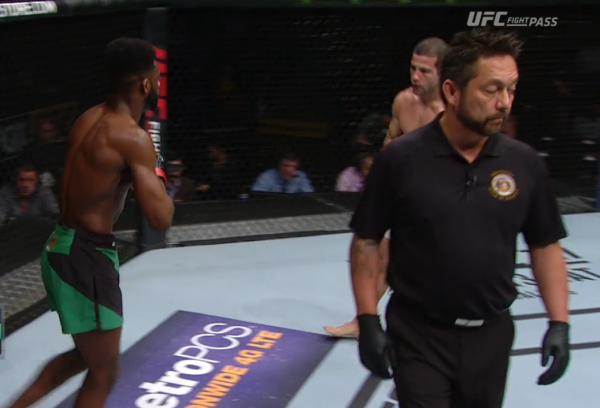 END_OF_DOCUMENT_TOKEN_TO_BE_REPLACED

Seriously, Mario. What the hell were you thinking here?

In the wee hours of Sunday morning, Yamasaki came well short of the mark again during UFC Oklahoma's main event.

There was a lot riding on the fight between Kevin Lee and Michael Chiesa. Both lightweights were looking to ascend the rankings to put them in that title picture while the champion's away preparing for his high-profile boxing match.

As the opening round was winding down, the momentum shifted toward Lee. 'The Motown Phenom" took his opponent's back and locked in a rear-naked choke. Before Chiesa could tap or go unconscious, Yamasaki decided to intervene and award Lee the first-round submission victory.

Was it a legit finish? Kevin Lee with a submission on Michael Chiesa that we'll be talking about for awhile! #UFCOKC https://t.co/mOFBUonnem

As angry as Chiesa was, White's rage may have topped it.

He took to social media yet again to complain about Yamasaki. This time, he tore him a new one on Instagram, likening him to a 12-year-old girl and begging him to do his job properly.